India   All India  24 May 2022  PM joins Biden to launch India-Pacific eco initiaitve to spur growth in region
India, All India 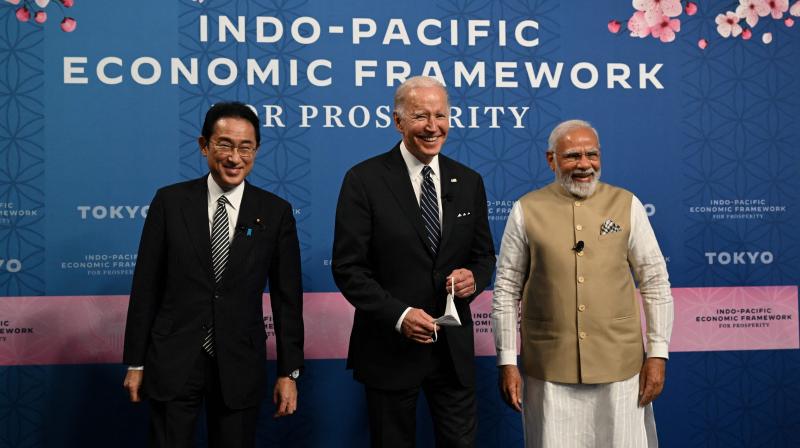 New Delhi: In the presence of United States President Joe Biden in Tokyo, Prime Minister Narendra Modi on Monday announced India’s partnership in the Indo-Pacific Economic Framework for Prosperity (IPEF), the US-led economic initiative that has on board the four Quad partners apart from South Korea and New Zealand and seven of the 10 Southeast Asian nations.

Modi said that the IPEF was a “declaration of our collective will to make the region an engine of global economic growth” while pushing for “trust, transparency and timeliness” as the three main pillars of resilient supply chains.

Meanwhile, India and the US also signed an investment incentive agreement (IIA) on Monday in Tokyo to “keep pace with the additional investment support programmes, offered by the DFC (US International Development Finance Corporation),” such as debt, equity investment, investment guarantee, investment insurance or reinsurance, feasibility studies for potential projects and grants. The pact was signed by foreign secretary Vinay Mohan Kwatra and Scott Nathan, Chief Executive Officer, DFC.

In his short address at the IPEF launch, PM Modi said, “The Indo-Pacific Economic Framework is a declaration of our collective will to make the region an engine of global economic growth. I thank President Biden very much for this important initiative.”

He noted that the Indo-Pacific region was the centre of manufacturing, economic activity, global trade and investment. “History is witness to the fact that India has been a major center in the trade flows of the Indo-Pacific region for centuries. It is worth mentioning that the world's oldest commercial port was in Lothal in my home state of Gujarat, India. Therefore, it is essential that we find common and creative solutions for the economic challenges of the region.”

New Delhi later said that “India was committed to a free, open, and inclusive Indo-Pacific region and believes that deepening economic engagement among partners is crucial for continued growth, peace, and prosperity.” It said India was keen to collaborate with IPEF partners.

In his address, President Biden said, “We’re writing the new rules for the 21st century economy that are going to help all of our countries’ economies grow faster and fairer. We’ll do that by taking on some of the most acute challenges that drag down growth and by maximising the potential of our strongest growth engines.”

The US President added, “Let’s choke off the loopholes that get at the corruption that steals our public resources.” It’s estimated that corruption saps between two and five per cent of global GDP.  It exacerbates inequality. It hollows out a country’s ability to deliver for its citizens.

Regarding tax and anti-corruption, the US said, “We are committed to promoting fair competition by enacting and enforcing effective and robust tax, anti-money laundering, and anti-bribery regimes in line with existing multilateral obligations, standards, and agreements to curb tax evasion and corruption. This involves sharing expertise and seeking ways to support capacity building necessary to advance accountable and transparent systems.”