Cyclone Yaas is feared to strike the Odisha and West Bengal coasts in a very severe shape, as deadly as last year’s Amphan 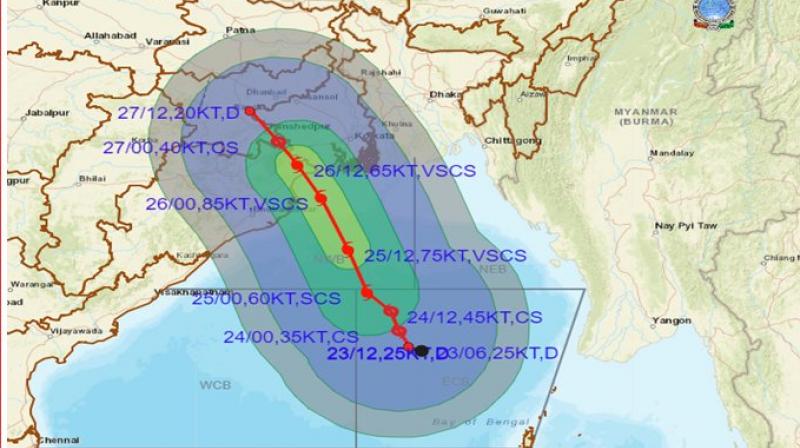 Cyclone Yaas, which is gathering strength in the Bay of Bengal, is likely to cross the north Odisha-West Bengal coast between Odisha’s Paradip and Sagar Island in West Bengal by May 26. (Photo: India Meteorological Department)

Kolkata/Bhubaneswar: As Cyclone “Yaas” is feared to strike the Odisha and West Bengal coasts in a “very severe” shape, as deadly as last year’s Amphan, at a maximum wind speed of 155-165 kmph gusting to 185 kmph on May 26 evening, the Indian Air Force has assigned nearly a dozen transport aircraft and more than two dozen helicopters from its fleet for large-scale humanitarian aid and disaster relief operations in the two eastern states.

Cyclone “Yaas”, which is gathering strength in the Bay of Bengal, is likely to cross the north Odisha-West Bengal coast between Odisha’s Paradip and Sagar Island in West Bengal by May 26 (Wednesday) evening as a very severe cyclonic storm, the India Meteorological Department forecast on Sunday.

“Satellite imageries and ocean buoy observations indicate that Saturday’s low pressure area which became well-marked over the east-central Bay of Bengal in the same evening has concentrated into a depression. It is now concentrated over the same east-central Bay of Bengal about 560 km north-northwest of Port Blair (Andaman Islands), 590 km east-southeast of Paradip, 690 km south-southeast of Balasore and 670 km south-southeast of Digha (West Bengal). It is very likely to move north northwestwards and intensify into a cyclonic storm by May 24 morning”, the IMD said in its afternoon bulletin on Sunday.

The bulletin added that the cyclonic storm will further intensify into a “very severe cyclonic storm” during the next 24 hours. And then it would continue to move north northwestwards, intensify further and reach northwest Bay of Bengal near West Bengal and north Odisha coasts by May 26 morning.

During landfall, the cyclone will be accompanied by squally winds with a velocity of 120 kmph to 165 kmph, gusting up to 185 kmph. It implies that “Yaas” will cause no less damage than “Amphan”, which had hit the Odisha and West Bengal coasts on May 2, 2020, with a wind speed of 155-165 kmph and gusting up to 185 kmph.

During the day, the IAF airlifted 21 tons of disaster relief equipment and 334 National Disaster Response Force personnel from Patna and Varanasi to Kolkata, and from Arakkonam to Port Blair, utilising five C-130J aircraft. “This is in preparation for the approaching Cyclone Yaas, and the operations are ongoing since May 21. Till date, the IAF has airlifted 606 personnel and 57 tons of NDRF material for this purpose,” it added.

In view of the weather forecast, the Mamata Banerjee government has relaxed its lockdown norms in some sectors for the protection of stock and other measures. It said: “All activities relating to agricultural, horticulture and floriculture, including transport, storage and sale of seeds, fertilisers, pesticides and agri-machines/equipment shall be allowed. Rural development work, including emergency flood control and pre-monsoon essential work, shall be allowed.”

The Odisha government on Sunday dispatched 18 NDRF teams to the coastal districts that are most likely to be affected by the cyclonic storm. Special relief commissioner P.K. Jena said seven NDRF teams were sent to Balasore district, four to Bhadrak, three to Kendrapara, two to Jajpur and one each to Jagatsinghpur and Mayurbhanj districts. Mr Jena himself went to the coastal districts to oversee cyclone preparedness by the local administration.

“Due to the cyclonic effect, north coastal districts of Odisha are likely to receive heavy to extremely heavy rainfall. The districts of Balasore, Bhadrak, Kendrapara and Mayurbhanj will be most affected. Similarly, the districts like Jajpur, Cuttack, Jagatsinghpur, Khurdha and Puri district will most probably receive heavy rainfall during the period,” IMD director-general Mrutyunjay Mohapatra said on Sunday.

As the low pressure turns into a depression and takes the shape of a very severe cyclonic storm, the Indian Navy has geared up to assist the state administrations in Odisha and West Bengal. Eight flood relief teams and four diving teams have been deployed in both states to augment existing resources. Four naval ships are on standby with humanitarian assistance and disaster relief bricks, diving, and medical teams to render assistance.

Naval aircraft have also been kept ready at Naval Air Stations INS Dega at Visakhapatnam and INS Rajali near Chennai to undertake aerial surveys of the affected areas, casualty evacuation, and airdrop of relief materials as required.