Confirming the incident, Inspector General of Police (Kashmir range) SP Pani said that a probe has been launched into the incident. 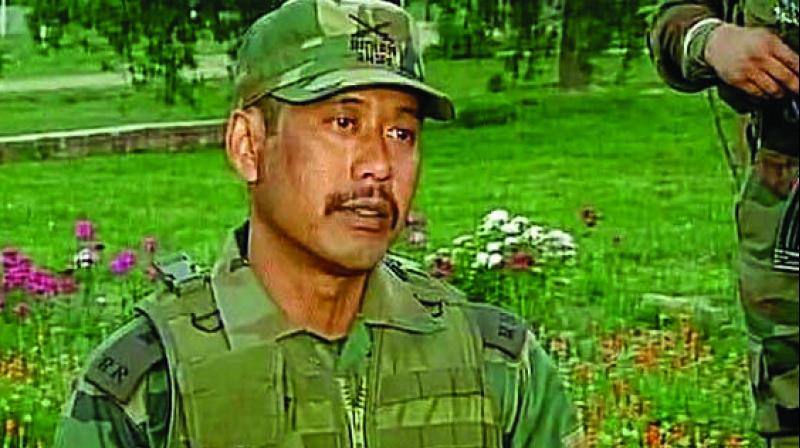 SRINAGAR: The Jammu and Kashmir police have launched a probe after an Army officer was caught in a scuffle with the staff of Srinagar hotel when they did not allow him to check in with a local woman and a youth from Budgam.

The officer is Major Leetul Gogoi of the Army’s 53 Rashtriya Rifles who had on April 9, 2016 ordered his men to tie Farooq Ahmed Dar, a Kashmiri shawl-weaver from Chhil Brass village of central Budgam district, to the bonnet of an Army jeep during the bypoll in the Srinagar Lok Sabha constituency. The incident of allegedly using a civilian as a ‘human shield’ had evoked rage within the state and beyond with human rights groups, including Amnesty International, demanding action against those responsible. However, the Army had not only exonerated Major Gogoi after a probe but he was also awarded a ‘Commendation Card’ for his “sustained distinguished service” in counter-insurgency operations in Jammu and Kashmir by Army Chief General Bipin Rawat. The police said that the Army officer was handed over to them after he was held by people with a woman and a youth from Budgam accompanying her at the Hotel Grand Mamta in Srinagar’s Dal Gate area.

The preliminary investigations by the police have revealed that Major Gogoi had booked a room in the hotel and when he along with a local woman and a youth from Budgam district where the Army officer is also posted reached the hotel to check in they had an altercation with the staff at the reception.

“The argument turned into a scuffle and when the people living in the neighbourhood and those passing through the area heard the noise they also joined,” a police officer said. The police were informed and when a party sent from the Khanyar police station reached the spot, it took the Army officer and the boy-girl duo into custody. Later, the police came to know that the officer was Major Gogoi, the police officer said.

Confirming the incident, Inspector General of Police (Kashmir range) SP Pani said that a probe has been launched into the incident.

“We are investigating the matter. We need to go by the merit of the case. We have informed Army unit where he (Major Gogoi) is posted.”

The hotel management said that a room was booked online in the name of Leetul Gogoi R/o Assam for Wednesday.