Panchayat elections in Bengal have regularly witnessed violence since the 1980s. 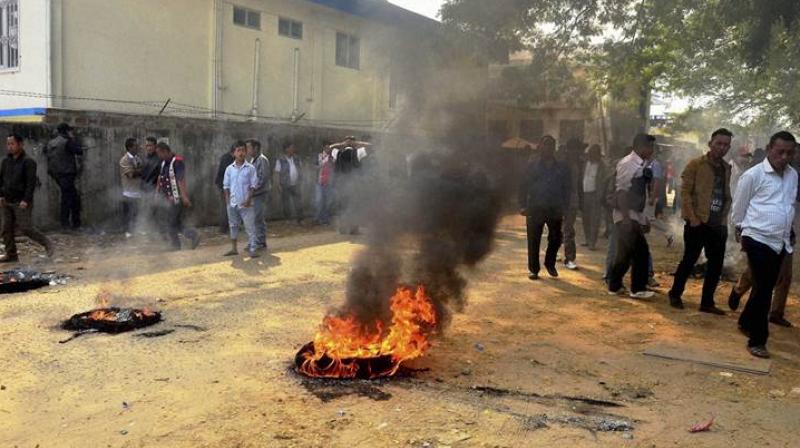 The only other election news in recent times apart from the Karnataka Assembly polls has been that of Bengal panchayat polls, marred with violence, deaths, intimidation. (Photo: PTI | Representational)

The only other election news in recent times apart from the Karnataka Assembly polls has been that of Bengal panchayat polls, marred with violence, deaths, intimidation.

Panchayat elections in Bengal have regularly witnessed violence since the 1980s. However, the scale of the violence has significantly increased this time. A reflection of this trend can be seen in the data given by the state election commission regarding the number of unopposed winners. While in 2003, 2008 and 2013, the winners who did not have to face any contest were 11 per cent, 5.57 per cent and 10.66 per cent respectively, the figure has drastically increased to around 34 per cent which amounts to over 19,000 seats, in 2018.

According to an appeal of lawyer Pradeep Chakraborty to the Kolkata High Court, pleading for rejection of the entire panchayat polls, a total of 24 deaths in violence were reported, apart from around 150 injured, of which 60 are in serious condition.

The legitimacy of the election process has been challenged, politically and in the courts, also by the parties in opposition to the ruling Trinamool Congress (TMC). The Supreme Court has directed the State Election Commissioner (SEC) to withhold declaring the results for the 20,000 plus seats where the Trinamool Congress won by default, as there were no other contestants.

The SEC has failed to function as an autonomous agency established by the Constitution of India, “vested” with the role of “superintendence, direction and control of the entire process for conduct of elections to the panchayats and municipal bodies.” The presence of gangs of Trinamool Congress operatives manning the gates of government offices, assaults on the media including wrongful detention of journalists, both men and women, indicates the degree to which the election process has been compromised. It is also true that in some places the opposition used similar intimidation tactics to prevent rivals from participating in the democratic process.

The Trinamool Congress also insists that mercenaries are imported from neighbouring states by its enemies and the opposition insists that hired goons are deployed by the ruling party.

State BJP president Dilip Ghosh alleged that due to the “unprecedented reign of terror” unleashed by the TMC, the opposition candidates could “neither file nominations nor were they allowed to contest”.

Senior CPI(M) leader Sujan Chakraborty alleged that the TMC had turned the polls into a “farce”.

According to SEC sources, 16,814 gram panchayat seats, 3,059 panchayat samity seats and 203 zilla parishad seats were uncontested. The leadership of Mamata Banerjee's TMC termed the victory in the uncontested seats a victory of the masses.

The ruling TMC later had a massive victory later and has won in 90 per cent of all the seats. A jubilant TMC said the result would boost the party ahead of next year’s Lok Sabha election as the rural poll was the last major electoral event in the state before it. In other words, the Trinamool Congress has gained a literally unprecedented stranglehold over rural self-government institutions.

That the Trinamool Congress would win was never in doubt. The scale of the victory, too, was really not, given the matching scale of violence, intimidation and rigging that was witnessed in the run-up to and during the elections. The ruling party seemed loath to leave anything to chance.

However, without condoning wanton violence in any form, it must be accepted that a large part of the rural electorate in Bengal does admire policies like Kanyashree (cycles and education to the girl-child), Sastho-bandhu (healthcare for the poor), and making of rural roads and schools. Add to these, TMC government patronage to local clubs, madrasahs, imams, and now pujaris also added, et al, which have all paid it rich electoral dividends.

Even before the panchayat polls, BJP was already on the rise in vote-share in Bengal and at the cost of CPM and Congress, while TMC has been increasing its voteshare and maintaining the lead all throughout.

According to a senior state BJP leader, it was the first time that the party has been elected to the gram panchayat level in every district of the state. Clearly these polls were a litmus test for the BJP before it goes for the big haul in 2019 Lok Sabha polls.

Amit Shah’s strategy has always been treating Bengal rural polls as ‘quarter-final match’ before 2021 assembly polls. Taking on the organisational strategy of the Marxists, Shah asked Bengal BJP leaders to spread out to the state’s 77,000 odd polling booths.

In Nadia, parts of East and West Midnapore and Burdwan districts, the unimaginable has happened; at the grassroots, the Bharatiya Janata Party and the CPI(M) have quietly closed ranks against the Trinamool Congress (though this has been officially denied by the CPI(M). The pattern of quiet collaboration by parties that are not officially partners has taken place, with the Congress and CPI(M) working together in Malda and Murshidabad districts.

It is clear today that the TMC has used violence to scare away the CPI(M) and knowingly or otherwise, has made room for the BJP to make a more forcible entry in Bengal hinterland. Ironically, the BJP is perceived by some of the CPI(M)’s managers as a powerful party with whom a tacit understanding will serve to protect candidates and supporters from the violence of the ruling TMC.

After the Bengal panchayat polls, the state is looking at a new political landscape in which a pulverised Left has been replaced by the BJP. The most significant feature of the final outcome of West Bengal's panchayat elections is not the fact that the Trinamool Congress won. The true significance lies in what happened to other parties. The situation today is that without an official pre-poll alliance between the Left and Congress, both will be simply washed out in any future elections in Bengal. Already in several districts, both unofficially cooperated with each other. Last CPI(M) Politbuoro meeting concluded in favour of an all out unity against Hindutva politics. So, once dead enemies, Left and and Congress will see the Yechurian Principle of bonhomie between them grow in flesh and blood ahead.

Interestingly this time, overall BJP emerged as the main challenger to TMC in gram panchayat in almost every districts except Murshidabad and Malda, the two Congress strongholds, though CPIM has not been second force in any district.

Electorally speaking, next year's parliamentary polls is what all parties are waiting for. The context is provided by the Trinamool Congress' clear objective of winning all 42 Lok Sabha seats. It is difficult to see, as things stand, any outcome other than the Trinamool winning an overwhelming majority of seats. From the outset, it seems clear that the CPI(M) will win nothing after the two it managed to win in 2014.

Last time, the Congress won four out of five seats in Malda and Murshidabad. It's pretty certain that it won't be able to repeat that feat.

It belongs, then, to the BJP to spoil the Trinamool Congress' party. In 2014, the party won from two constituencies. One of them was Darjeeling, which is not relevant in this context since there are no panchayats in the hills. The second was Asansol. The ruling party has rolled the BJP over in this area. But the BJP has made unexpected and significant gains in tribal-dominated areas of three districts like Bankura, Jhargram and Purulia. It has almost matched the Trinamool in Purulia, the only district in which the Opposition has aggregated more seats than the ruling party as far as gram panchayat seats go.

If there is TMC-Left-Congress united opposition to BJP in the Lok Sabha polls, as is the attempt of one school of thought with the blessings of Laloo Yadam, Devegowda and even Yechury, there will be a clean sweep of Bengal by this trinity, which, in any case, is not an easy thing to evolve in the first place.

The 2018 panchayat elections in West Bengal seem set to make history, for the wrong reasons. The interventions by the Supreme Court and the Calcutta high court, the capitulation of the SEC to pressure from the government, the unprincipled collaborations of sworn political enemies for electoral gains, the capsize of the police and the administration have sucked the legitimacy and credibility out of the process and eroded the idea of free choice and peaceful participation. It seems the saga of electoral violence in Bengal is here to stay.

The larger concern is that the model of capture and control by the ruling party will be copied and used in other places as well. It is noteworthy that the tactics used by the TMC in Bengal to decimate the CPI(M), by burning its party offices in remote rural areas, vandalising the homes of its supporters, turning voters into political refugees fleeing a vengeful victor has been replicated in Tripura after the BJP’s victory earlier this year. The escalating violence in Kerala between the BJP-RSS and the CPI(M), with tit for tat assaults and killings are a reminder of the sort of violence that followed the victory of the Trinamool Congress in 2011 and again in 2016. In robbing the democratic process, in the very limited sense of free and sort of fair elections, the Bengal model, as it is emerging, is a dangerously appealing one for ruling parties where the opposition is weak and divided.

The panchayat elections were held a year ahead of 2019 general elections. The chief minister Mamata Banerjee has been trying to become the fulcrum to unite all forces which are opposed to the BJP and hence wanting to have a opposition-mukt panchayat elections to cement her standing ahead of next year.