Lalita Bansi, who had to undergo 17 surgeries after braving an acid attack in 2012, tied the knot with her lover, 27-yr-old Ravi. 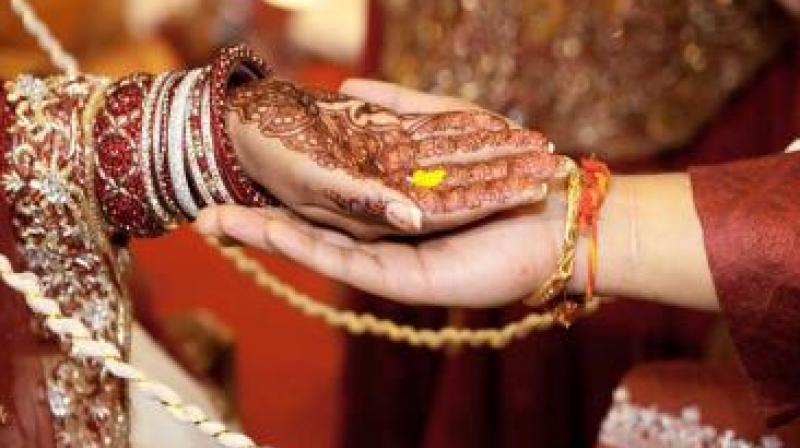 Lalita and Ravi married each other in Thane in presence of their family members, friends and an NGO that works for the rehabilitation and welfare of acid attack survivors. (Photo: File/Representational)

Thane: This is the story of a 26-year-old woman, whose life went haywire following an acid attack five years ago, but was set right by calling a 'wrong number,' which led her to her prince charming and they tied the nuptial knot.

Lalita Bansi, who had to undergo 17 surgeries after braving an acid attack in 2012, tied the knot with 27-year-old Rahul Kumar alias Ravi, whom she had called up once by mistake and ended up falling for him.

Lalita and Ravi married each other in Thane in presence of their family members, friends and an NGO that works for the rehabilitation and welfare of acid attack survivors.

While Lalita belongs to Kalwa in Thane, Ravi hails from suburban Malad in neighbouring Mumbai. Their association began four months ago with a wrong call, which bloomed into love.

According to the chairperson of Mumbai-based Courage Incumbent Foundation, Daulatbi Khan, who was present at the wedding, Lalita and Ravi fell in love after conversing over phone initially. She said the bride's disfigured face did not come in between Ravi's love and commitment towards her.

Narrating Lalita's story, Khan said she was attacked with acid by her cousin at her uncle's village in Uttar Pradesh's Azamgarh five years ago, disfiguring her face and other body parts. Lalita was targeted after a quarrel broke out between the duo during her visit.

After the horrifying incident, Lalita returned home in Kalwa's Waghoba nagar. "It was around four months ago while calling an acquaintance, she called up a wrong number, which eventually changed her life," Khan said.

The call was received by Ravi, a CCTV operator with a private firm in Malad. They soon became friends and started talking. Later both fell in love. She says Lalita and Ravi had not met each other until recently as the victim was apprehensive about revealing her past.

She, however, decided to confide in Ravi about her fears. And to her surprise, Ravi accepted her, saying that he loved her, not her scars. After the marriage, outside the registrar office in Thane, a visibly delighted Lalita, attired in shiny bridal robe, said that Ravi has set an example in the society by marrying her.

"I used to curse my fate and was reluctant about marriage. However, I gained courage because of Ravi and, finally, told him one day that my face was disfigured and he may not like me. But he was insistent due to my nature," she said.

Lalita said Ravi then discussed the matter with his family, who later visited her at her house. "After meeting me, he declared that he was determined to marry me," she added.