India   All India  24 May 2017  Funeral with full military honours for 3 Naugam bravehearts
India, All India

This is one of the rarest encounters where 3 Gorkha soldiers from Nepal have sacrificed their lives in one operation in the Kashmir valley. 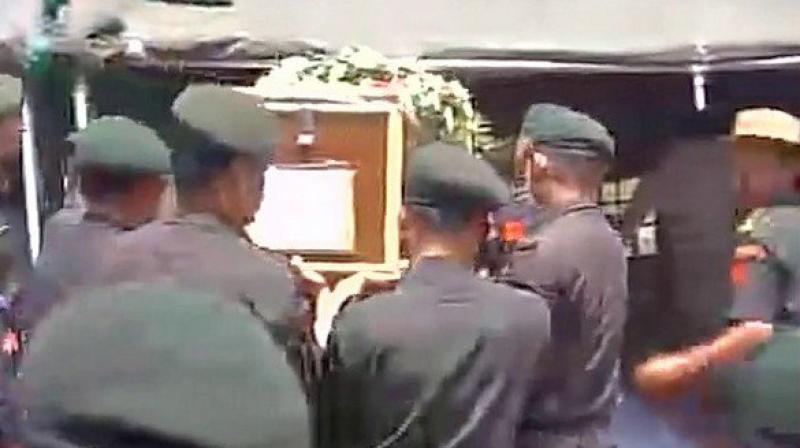 Solan (Himachal Pradesh): A funeral with full military honours was organized for the three bravehearts hailing from Nepal at Gorkha Regiment Base camp in Sapathu in Solan district of Himachal Pradesh.

Havaldar Giris Gurung, Havaldar Damar Bahadur Pun and Rifleman Rabin Sharma made the supreme sacrifice during a counter infiltration operation along the Line of Control (LOC) in Naugam sector on Saturday morning.

This is possibly one of the rarest encounters when three Gorkha soldiers from Nepal have sacrificed their lives in a single operation in the Kashmir valley.

The Army on Monday paid homage to all three, with General Officer Commanding Lieutenant General JS Sandhu in the lead.

Pakistani forces, particularly its Border Action Team (BAT) have been indulged in a number of incidents of unprovoked firing from across the LoC.

A sharp increase in Pakistan-backed firing and overnight shelling along the LoC has been witnessed.