India   All India  24 May 2017  Fake news triggered Paresh Rawal's tweet calling for Arundhati Roy to be tied to Army jeep
India, All India

Social media went berserk on Monday over Rawal’s tweet suggesting Roy should be used as a ‘human shield’ by the Indian Army in Kashmir. 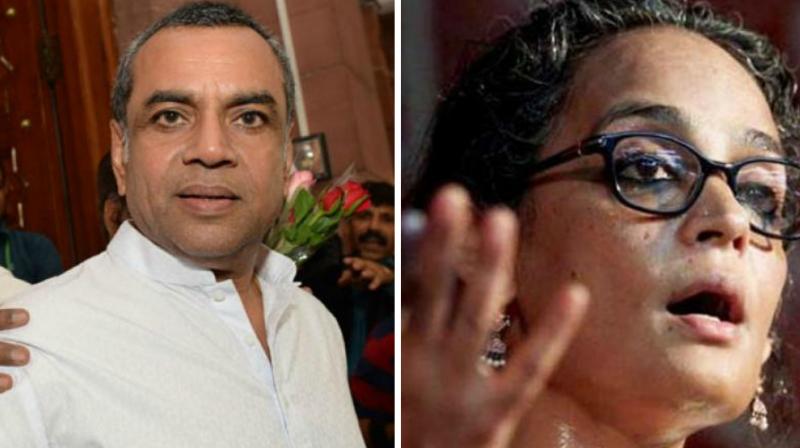 Paresh Rawal’s tweet calling for author Arundhati Roy to be tied to an Army jeep instead of a stone-pelter was based on a fake news article. (Photo: File)

New Delhi: Bharatiya Janata Party (BJP) MP and actor Paresh Rawal’s tweet calling for author Arundhati Roy to be tied to an Army jeep instead of a stone-pelter was based on a fake news article, it has emerged.

The news in question said that Arundhati Roy had given an interview in Srinagar.

According to a report in The Wire, Rawal's tweet was linked to a Facebook post by 'The Nationalist', which said, “70 lakh Indian Army cannot defeat Azadi gang in Kashmir: Arundhati Roy gives statement to Pakistani newspaper!”

The source of the Facebook post was postcard.news, a right-wing fake news site, which ran the story with the same headline on May 17.

"This lady who calls herself a journalist and Human Rights Activist has been standing up for terrorists since decades. Recently she has given an interview to Pakistan newspaper The Times of Islamabad, blasting the government of India for taking action against terrorists," the article said.

It also carried that she said, "India cannot achieve its objective in the occupied Valley even if its army deployment rises from 7 lakh to 70 lakh, further adding that Kashmiris have remained committed with their anti-India sentiments from many years."

In an interview to The Wire, Arundhati said that the report was all nonsense and that she had not been to Srinagar recently or had made any such statements as carried by the news site.

Paresh Rawal had kicked up a storm on Twitter when he said that author Arundhati Roy should be tied to an Indian Army jeep instead of a stone pelter. "Instead of tying stone-pelter on the Army jeep tie Arundhati Roy," Rawal tweeted.

Social media went berserk on Monday over Rawal’s tweet suggesting Roy should be used as a ‘human shield’ by the Indian Army in Kashmir.

Instead of giving in to Rawal's negative comment, Roy dismissively said, “I would be mortified if those people liked me”.

Roy has been widely known for her anti-establishment views and her sharp censure of the Indian government for its handling of political turmoil in areas like Kashmir and Bastar.