India   All India  24 Apr 2020  In Kota, Bihari students watch everyone else go home
India, All India

In Kota, Bihari students watch everyone else go home 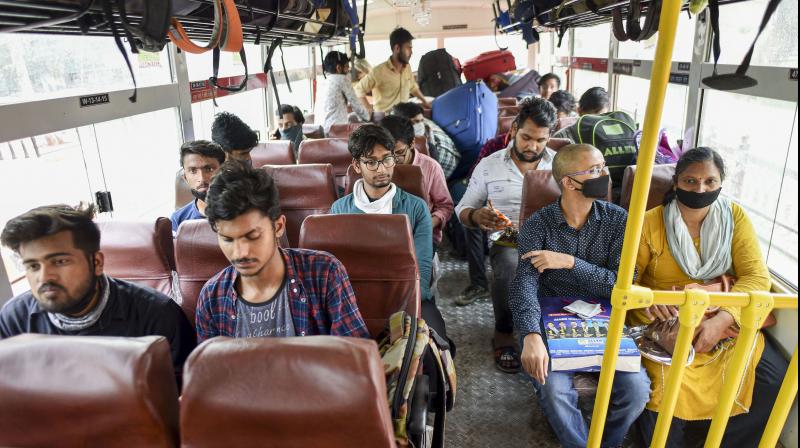 For nearly a week, states other than Bihar have been arranging buses, such as this one by Uttar Pradesh, to take students from tutorial town Kota in Rajasthan to their home towns. (PTI)

Kota/Patna: For the 12,000 students from Bihar who are stuck here in the tutorial town of Kota in Rajasthan, it can’t have been a pleasant sight to see students from states other than their own clamber on to special buses chartered by their governments to bring them home.

Nearly 1,400 students from Haryana and Assam left Kota for their home towns by buses this morning morning, while over 2,000 from various places in Rajasthan were scheduled to leave in the evening. Even the tiny UT of Dadra and Nagar Haveli sent three buses to pick up its 50 students.

Thousands of students who came here to be coached in the art of cracking competitive exams have been left to cope with cramped accommodation and restricted movement since a lockdown was thrown over the entire country to stop the spread of the coronavirus.

Some 12,000 of them are from Bihar. As the buses left Kota this morning, the Bihari students staged a silent protest, appealing to Nitish Kumar, the chief minister of their home state, to send them a few buses too.

But over there in Patna, the Nitish Kumar’s government informed the High Court that it cannot bring back the students stuck in Kota. Efforts are being made, however, to extend all possible support to them, as per guidelines issued by the Union Ministry of Home Affairs.

The High Court heard the petition, filed by an advocated named Ajay Thakur, by video-link.

Nitish Kumar is taking flak from the opposition for its refusal to bring back the students from Kota. The state government says it cannot rescue only some people but not others.

What is implicit here is that if they sent buses to fetch the Kota students, they’d have to make similar arrangements to bring back hundreds of thousands of migrant workers from Bihar who are similarly being held in temp shelters and makeshift accommodation in several states after they fled the lockdown whereever they work.

For the Bihari students in Kota and their parents back home, the spread of the coronavirus in Rajasthan has been a worrisome development. Rajasthan’s state’s corona count crossed 2000 on Friday, putting the state in the fourth position in India.

Bihar’s disaster management department has set up a helpline (0612-2294600) exclusively for the students stuck in Rajasthan. But those staged a silent protest in Kota this morning were clearly demanding more. Maintaining social distance, they held up placards with appeal tp Nitish Kumar.

Shahbaz (18), a NEET aspirant, and his roomie Aajam Hussain said they were desperate to go home to Katihar district as it was getting more and more difficult to spend even a single day here amid a critical problem of food and the COVID-19 panic.