Before joining PDP on November 1, 2014, Dar had been associated with Congress party in various capacities. 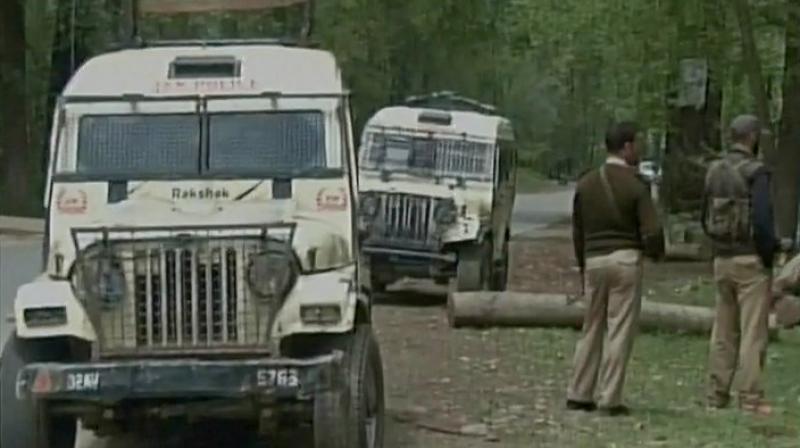 Srinagar: A senior leader of ruling Peoples’ Democratic Party (PDP) Abdul Gani Dar was shot and critically wounded by suspected militants near his residence in Jammu and Kashmir’s southern Pulwama district on Monday.

He was rushed to Srinagar’s government Sri Maharaja Hari Singh (SMHS) Hospital where he succumbed soon, the police and hospital sources said.

The incident took place on a day when Chief Minister, Mehbooba Mufti, met Prime Minister Narendra Modi in New Delhi to discuss the situation prevailing in the Kashmir Valley. She emphasised that dialogue was the only way to prevent it from deteriorating and invoked former Prime Minister Atal Bihari Vajpayee's ‘Insaniyat, jamhooriyat and Kashmiriyat’ policy on Kashmir.

In an apparent suggestion for resuming talks with separatists, she said the thread should be picked up from where he had left off.

The police and witnesses said that Dar was targeted by gunmen while he was on way to summer capital Srinagar. “He was shot between Pahoo and Pinglan villages, not very far from his residence,” said a police officer over the phone from Pulwama.

Dar had been associated with Congress party in various capacities before joining PDP on November 1, 2014, the party sources said. The doctors said that Dar had received grievous bullet wound in the chest and that they could not revive him.

Pulwama is part of Anantnag Lok Sabha constituency where a by-poll is scheduled to be held on May 25. The polling was to be held on April 12 but following widespread disturbances witnessed during the by-poll to Srinagar Lok Sabha seat on April 9, the Election Commission of India acting on the recommendations of the State government deferred the same till May 25.

Attacks on mainstream political activists by suspected militants in Kashmir have intensified during past few weeks which is reminiscence about difficult times they had faced in early 1990s. A local attorney and former public prosecutor Imtiyaz Ahmed who was associated with opposition National Conference (NC) was shot dead by gunmen outside his house in southern Shopian district, also part of Anantnag constituency, last week.

Earlier a pharmacy owner and PDP activist Bashir Ahmed Dar was shot dead by suspected militants in Qasbayar village of Pulwama district. His cousin Altaf Ahmed Dar was critically wounded in the shootout. A couple of more mainstream political activists were targeted in similar fashion elsewhere in the Valley prior to these incidents, spreading fear among others and their families. The homes of some police officials have also been targeted by militants in the recent past.

A militant outfit had last month asked the ‘pro-India’ activists to disassociate themselves from their parties and stay away from their political activities or be ready to face consequences.

The outfit had said that these political activists should decide also on the call of their conscience as “terrible atrocities” were being inflicted on the people of Kashmir by the government forces.

While the security already provided to prominent people from these parties was reinforced or, at least, their personal security officers were alerted against possible attacks, the fate of others has been left at the mercy of militants as, the authorities maintain, “it is not possible to provide security cover to each and every political worker”.

However in the case of police officials, in view of “disturbing trend” by the police department last week issued an advisory asking its field personnel to avoid visiting their homes “for the next few months”.

It while referring to the recent “unfortunate” incidents wherein “militants and anti-national and anti-social elements have caused damage to the life and property of police personnel” asked them to exercise extreme caution while visiting their homes.

“They should preferably avoid visiting their homes for the next few months as their personal security is of paramount importance," the advisory said. It also asked all the heads of various formations to brief their officers and men regarding the threat so the life and property of police personnel were secured.

PDP chief spokesperson and former minister, Dr. Mehboob Beg, said that it was very unfortunate that political workers are being targeted by gunmen in the Valley.

He told Deccan Chronicle, “It is unfortunate and the moment for showing serious concern. In democracy, you may hold divergent views on issues and there is no harm in doing that. But using violence and intimidation to force your ideology or political will on others is unfortunate and shameful”.

Asked if the recent incidents will leave adverse impact on the functioning of mainstream parties in Kashmir, he said, “The political space is undoubtedly shrinking.

The incidents will impact the functioning of mainstream political parties which are known as pro-Indian forces. But we fought it out in the 1990 and onwards and we will do it now as well”.

Qualifying his statement he said that the same would be done “not through violence, intimidation or aggression but politically”. He reiterated that everyone has the right to preach his political views peacefully and democratically.”

Last week, Amnesty International (AI) had termed the attacks on mainstream political activists as human rights abuse and asked for immediate halt to these.

“The killings, intimidation and harassment of ordinary people by suspected armed group members can never be justified, and should stop immediately,” said Aakar Patel, Executive Director at AI, India.

He added, “Civilians must not be targeted under any circumstances. People’s political or personal associations cannot become a reason for them to come underattack. State authorities should investigate these incidents and bring the perpetrators to justice swiftly.”