The UIDAI is only a central body which has outsourced data collection to hundreds of private agencies. 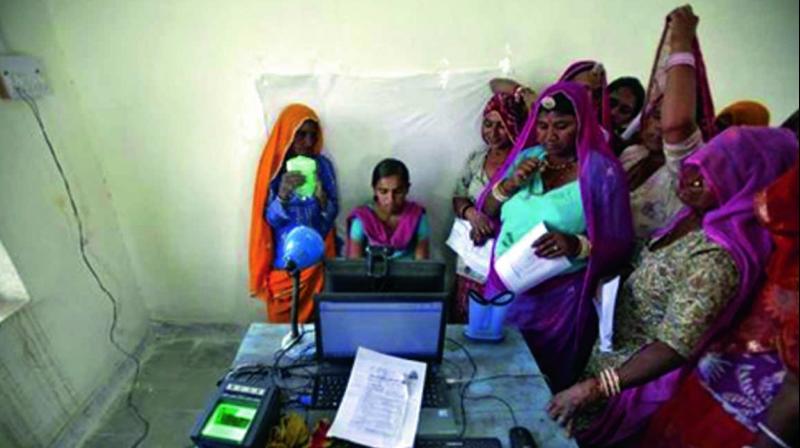 A file photo of women queuing up to apply for the Aadhaar card in Merta town of Rajasthan.

The weather app shows it is 43 degree Celsius outside a pigeonhole “photocopy” shop – a catch-all term for any documentation place – at Kalkaji in south Delhi. The so-called Aadhaar centre, with a corrugated Coca-Cola fridge half blocking the entrance and a vintage Xerox photocopier occupying the rear, has space for barely three people. It is one of the several government authorised “centres” in the neighbourhood that enrols people in the Aadhaar programme.

Namita Pal waits in a queue of a dozen people under the noon sun. “My husband believes we will need Aadhaar card to get food. I don’t want any problem later,” the 43-year-old vegetable seller and mother of two schoolchildren says. She is not sure if there is a link between Aadhaar and the public distribution system. The family uses a ration card.

While the shopkeeper and his assistant were busy taking forms, a well-dressed man gets out a long car, walks in and tries to skip the queue. But the upset crowd promptly puts him in his place at the fag end of the line.

Ms Pal is among millions of Indians — rich and poor — who have been queuing up outside “photocopy” shops to “surrender” their fingerprints and iris scans, more so in the recent past after the government made Aadhaar mandatory for obtaining certain services. No one knows what services would the government club with Aadhaar next.

What started out as a tool to strengthen national security evolved into a tool to provide welfare schemes to citizens of the second-most populated country. The United Nations estimated India’s population at 1.32 billion in July 2016 – nearly a fifth of the world’s population. The Unique Identification Authority of India says 1.13 billion people have enrolled in the Aadhaar programme till March 31, 2017.

In 1999, the National Democratic Alliance government formed a panel headed by security analyst late K. Subrahmanyam to look into gaps in India’s security system following the Kargil War in the same year.

A year later, Subrahmanyam gave a report to former Prime Minister Atal Behari Vajpayee, seeking identity cards for people living at villages in border regions. The report said the ID card programme should be expanded to include all people living in border states.

In 2009, the Planning Commission of India set up the  Unique Identification Authority of India and made Infosys Ltd co-founder Nandan Nilekani the biometric identity project’s chairman. The rest is history. The current discourse on Aadhaar could touch four main issues.

First, misuse of privacy was the earliest concern that critics of the pan-India identity programme raised. Aadhaar involves biometric data, a deeply personal thing, although people have been giving personal information to outside agencies for years. Think of permanent account number, mobile phone verification form, even the details one gives while opening a new email or a bank account.

The UIDAI is only a central body which has outsourced data collection to hundreds of private agencies. Transgressions by any one of them is a remote possibility, nonetheless a possibility.

Second, some critics argue that people who have not enrolled in the Aadhaar programme may not get welfare benefits. The government has denied this allegation. “I want to make it very clear on behalf of the government that no poor shall be denied his subsidy rights at all. Be very clear about that,” Union law minister Ravi Shankar Prasad said in the Rajya Sabha in early April. But opposition parties don’t believe Mr Prasad.

Third, Aadhaar lies on a grey area of the law. The Supreme Court on April 21 criticised the government for “making Aadhaar mandatory”. “How can you make Aadhaar mandatory despite a clear order to make it optional? Is making Aadhaar by force the only way to tackle fraud?” the court told the Centre. The court proceedings will go on, but citizens will have to follow what the government says in the meantime. Aadhaar critics say the government will slowly bring all citizen-State transactions under the identity programme.

And fourth, activists and political parties that don’t share the Bharatiya Janata Party’s worldview believe the government may suddenly announce a drastic measure related to Aadhaar whose consequences are unknown. The surprise demonetisation of high-value notes, though not related to Aadhaar, could be an example of the unpredictability of this government’s intentions.

Back in 2010, Gopal Krishna of the Citizens Forum for Civil Liberties wrote to Sonia Gandhi, who was heading the National Advisory Council then, drawing her attention to “historical reasons against Aadhar project”.

The letter, available on the website of top social sciences think tank Counter Currents, says: “UID/Aadhar project gives a sense of deja vu. It is the same path which IBM... traversed with the Nazi Germany for targeted asset confiscation... with its punch card and card sorting system — a precursor to the computer — that made the automation of human destruction possible.”