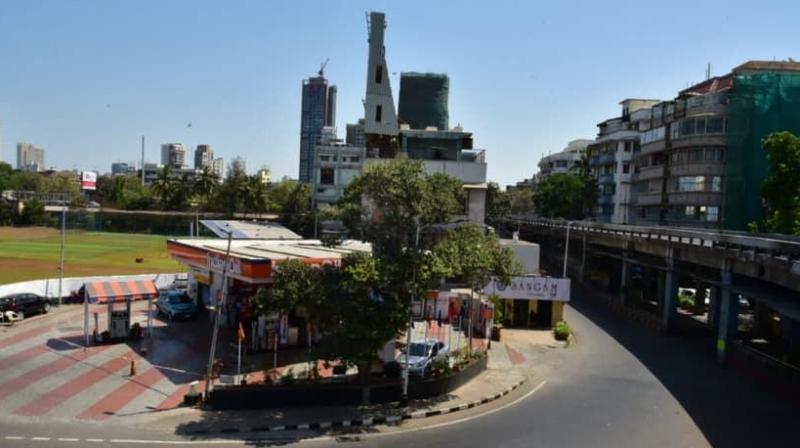 New Delhi: Coronavirus cases crossed 500 and one more death from the infection reported taking the toll to ten, as the Centre on Tuesday asked the states and union territories to clamp curfew wherever necessary in the wake of people defying lockdown orders in several parts of the country.

As 32 states and union territories announced complete lockdown till March 31 to deal with the pandemic, authorities are taking a serious view of people continuing to venture out despite the lockdown considering that the coming days and weeks are going to be extremely crucial to contain the spread of the viral infection.

With the coronavirus lockdown hitting the Indian industry hard and causing job losses, Finance Minister Nirmala Sitharaman said an economic package to help tide over the crisis will be announced very soon.

Sitharaman told reporters an announcement on the package would be made sooner than later.

Two states - Punjab and Maharashtra - and a UT - Puducherry - have already declared curfew in their respective areas.

States like Uttar Pradesh on Tuesday decided to expand the lockdown to cover the entire state.

In Maharashtra, a 65-year-old coronavirus patient died in Mumbai, taking the death toll due to COVID-19 to three in the metropolis. The western state has accounted for 101 of the total 492 cases followed by Kerala(91).

The man recently returned from the United Arab Emirates(UAE) to Ahmedabad. He later complained of fever, cough and difficulty in breathing, the Brihanmumbai Municipal Corporation (BMC) said in a statement.

The patient was brought to the Kasturba Hospital in Mumbai on March 20 for treatment, but his health condition deteriorated further.

According to the data updated on Tuesday morning, the total number of COVID-19 cases rose to 492, including 446 active cases. The figure includes 41 foreign nationals. Cases of a few more persons having tested positive for the infection were reported during the day.

Thirty-seven people have been cured/discharged/migrated, according to the official data.

As cases of the viral infection surged, authorities have put almost the entire country under lockdown, banning gathering of people and suspending road, rail and air traffic in unprecedented steps till March 31.

A top functionary of the central government called up some of the chief ministers and apprised them of the necessity of imposing the curfew if people continue to venture out of their homes.

The state governments and the union territory administrations have been advised to impose curfew wherever necessary as many people continue to go out of their homes despite the lockdown ordered to check the spread of the virus, a government official told PTI.

The state governments have been conveyed that public gatherings could lead to escalation of the prevailing situation.

"Now, it is up to the state governments to take action as per the local situation and give necessary instructions to the district magistrates who have the powers to impose curfew," the official said.

In Kerala, the latest state to order a lockdown, buses went off the roads and shops, barring those selling essentials, remained shut but violations were galore, prompting police to book culprits.

Autorickshaws and private vehicles, including two-wheelers, were seen plying at several places disregarding instructions that people should not venture out without any valid reason.

At some places in Haryana, police had a tough time to persuade people who were out for non-essential work and sent them back to their homes.

In Bhiwani, at a check barrier, police had to deal with number of two-wheeler riders many of them who were out on roads for non-essential work.

We are persuading them and sending them back to their homes, said a police personnel on duty at a check barrier.

In Delhi, Union Health minister Harsh Vardhan reviewed the status of containment and management of COVID-19 in the country and emphasised on the quality and sturdiness of the community surveillance and contact tracing.

As on date, cumulatively 1,87,904 persons are under surveillance, and around 35,073 have completed 28 days observation period as on day, an official statement said. Vardhan visited the National Centre for Disease Control (NCDC) Control Room and the Testing Laboratories, and reviewed the current status there with the senior officials.

He also interacted with the National Health Mission(NHM) MDs and senior surveillance officers of the states/UTs through a video conference.

You all form our frontline warriors, who through supporting people with correct, timely and vital information, are rendering yeoman service to the nation."

I salute the scientists who work with the testing procedures, and put themselves at risk in their line of duty."

Reviewing the status of containment and management of COVID-19 with the NHM MDs, Vardhan emphasised on the quality and sturdiness of the community surveillance and contact tracing.

It is the need of the hour that all the people who are either in home or facility quarantine, need to maintain strict vigil, and practice the laid down protocols of social distancing, and personal hygiene. Special care needs to be taken of the elderly, pregnant women and small children," he added.