Earlier in January, a CBI court in Ranchi had sentenced Lalu Prasad to five years in jail in the third fodder scam case. 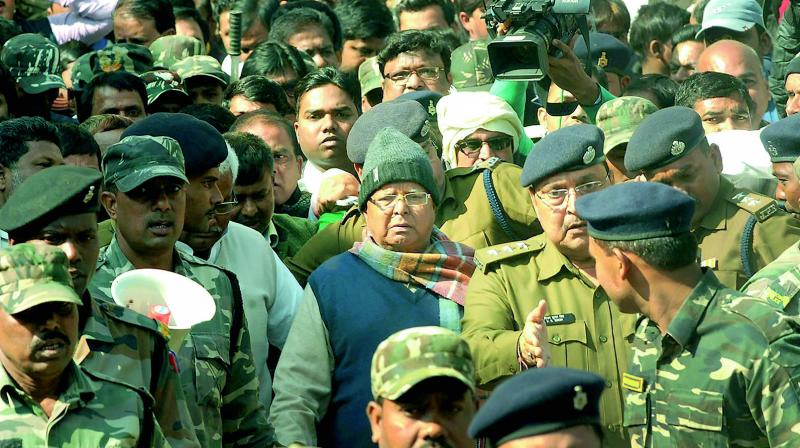 The CBI court had pronounced him guilty on March 19 in a fourth fodder scam case involving fraudulent withdrawal of Rs 3.13 crore from the Dumka treasury. (Photo: PTI/File)

Ranchi: A special CBI court on Saturday sentenced RJD supremo and former chief minister of Bihar Lalu Prasad Yadav to 14 years in prison along with a fine of Rs 60 lakh in Dumka treasury case.

CBI judge Shiv Pal Singh awarded two sentences of seven years each to the former Bihar chief minister under the Indian Penal Code (IPC) and the Prevention of Corruption Acts.

The CBI court had pronounced him guilty on March 19 in a fourth fodder scam case involving fraudulent withdrawal of Rs 3.13 crore from the Dumka treasury.

Earlier in January, a CBI court in Ranchi had sentenced Lalu Prasad to five years in jail in the third fodder scam case.

Along with Lalu, former Bihar chief Jagannath Mishra, was also sentenced to five years in prison in the case.

Both Lalu Yadav and Jagannath Mishra, were also fined Rs 5 lakh each by Ranchi Court.

The conviction and the quantum of punishment was delivered in a case related to the Chaibasa Treasury from which Rs 33.67 crore were siphoned off against the actual allocation of just Rs 7.10 lakh in 1992-93.

On January 6, RJD chief Lalu Prasad was sentenced to three-and-a-half years in jail by a CBI special court in a fodder scam case relating to fraudulent withdrawal of Rs 89.27 lakh from the Deoghar Treasury 21 years ago. This is the second fodder scam case in which Lalu Prasad has been jailed.

Lalu Prasad was convicted in the first fodder scam case in 2013 and awarded five years in jail.