Congress spokesperson Rajeev Gowda also said Krishna before quitting could have waited for the outcome of Karnataka Assembly polls. 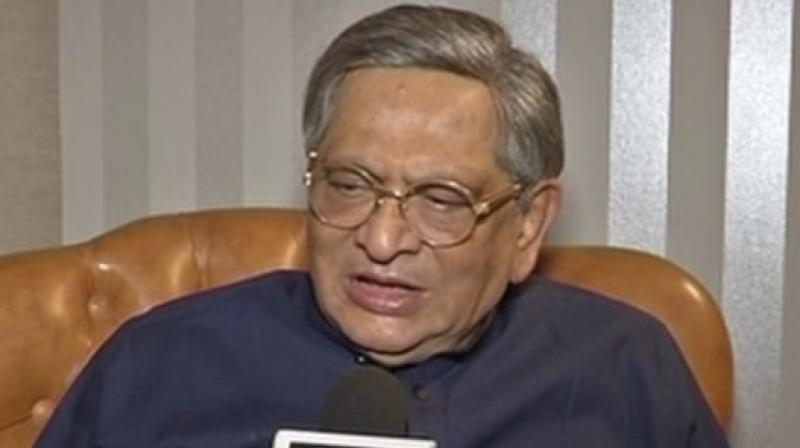 New Delhi: The Congress today accused the BJP of poaching its leaders with clean image like S M Krishna ahead of Karnataka polls but said people of the state will not be fooled.

Congress spokesperson Rajeev Gowda also said Krishna before quitting could have waited for the outcome of Karnataka Assembly polls as the party's efforts to reorganise and strengthen it will yield good results.

"In Karnataka, the BJP is desperately looking for fig leaf...Their leaders are jailbirds and people who have a horrible reputation in front of the people of Karnataka – Shri Yeddyuruppa has been to jail, Shri Janardan Reddy has come out of jail. "The BJP before these elections has no face of its own.

So, they are reaching out to clean Congress people with the hope that it will provide them some kind of a camouflage for their real antecedents. But people of Karnataka will not be fooled and the BJP will meet sorry outcome in the upcoming elections," he said.

Gowda said Karnataka and other states coming up for polls will deliver the same vote of confidence and "Krishna should have been a little more patient, he would have seen the impact of these changes and we could have used his advice and experience as well".
"If he had waited for little more time, he would have experienced that there is lot of internal effort that is going on for reorganising the party, revitalising the party.

"Karnataka would have been wonderful example of how we are going to not just reorganise and strengthen the party but also deliver results which will change the momentum just like Punjab had delivered a vote of confidence in Congress party
across country," he said

Gowda said he has been following Krishna's political career and the Congress party had given him everything except three positions of President, Vice President and Prime Minister.

"May be there is a possibility that these are positions on offer. There are some elections coming up. We do not know, only he and the BJP leadership know what induced him to take the decision," he said.

Krishna, a former Union External Affairs Minister during UPA, joined the BJP yesterday in the presence of party chief Amit Shah and hit out at Congress vice president Rahul Gandhi saying politics is serious business and not a "hit-and-run job".

The 84-year-old leader also alleged that there is a disconnect between the Congress leadership and the rank and file of the party and that there is no leader in the party who
could match Prime Minister Narendra Modi.