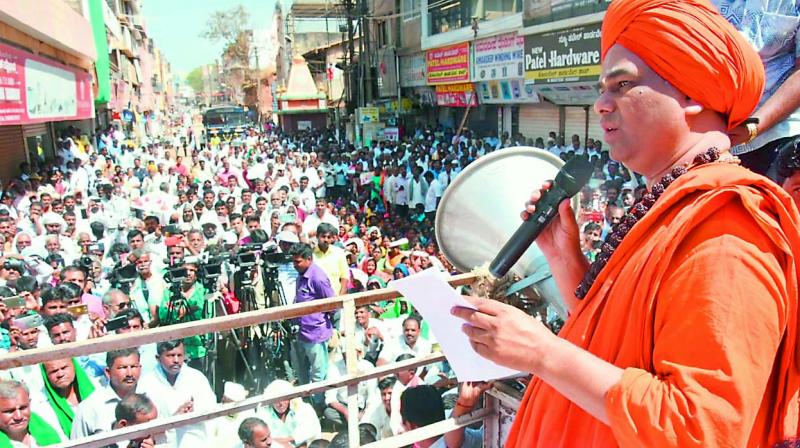 Dingaleshwar Swamiji addresses a public meeting of his devotees. (Photo: The asian age)

Hubballi: A succession crisis has gripped one of the largest mutts of the Lingayats — the dominant community in Karnataka to which Chief Minister B.S. Yediyurappa belongs.

Dingaleshwar Swamiji of Balehosur (Gadag district) claims he is the successor to the present seer of the mutt, Gurusidda Rajayo-gindra Swamiji, which has been contested by another seer, Mallikarjun Swamiji of Gubbalagumpi village in Gokak taluk who claims he was declared successor in 1998.

In fact to stake his claim, Dingaleshwar Swamiji held ‘Satyadarshan’ with his devotees amid tight police security in front of the religious institution and also took out a procession along with thousands of his devotees before the meeting. But cops did not allow him to convene the meeting inside the mutt citing law and order issues

The seer claimed he had all records to prove his appointment as successor and set a 45-day deadline to appoint him successor.

Meanwhile, Mallikarjun Swamiji too visited the mutt along with his devotees to stake claim. The mutt has contributed a lot to the elimination of discrimination in the 12th century when social reformer Basavanna launched a revolution (Kalyan Kranti) to bring equality in society. The religious institution was named Moorusavir Mutt as it provided shelter to 3,000 seers during the revolution. The total property of the mutt is valued at hundreds of crores and it has thousands of devotees spread across the state.

Addressing the meeting of his devotees outside the mutt, Dingaleshwar Swamiji accused some seers of hatching a conspiracy to prevent him from becoming successor. He claimed Gurusidda Rajayogindra Swamiji has named him successor in 2014 in the presence of several politicians and senior leaders of the Veeras-haiva-Lingayat community but some seers were trying to malign his image by lodging criminal cases against him.

“Moorusavir Mutt has never been a controversial religious institution. Some seers fear that they will lose their influence if I become successor. Ther-efore, they are unnecessarily torturing me,” Ding-aleshwar Swamiji said.

Meanwhile, the present head Gurusidda Rajayo-gindra Swamiji claimed that he is physically and mentally fit to run the religious institution. Hence, the question of appointing a successor did not arise. at this juncture, he added. "I don't want to react on the issue of successor as the matter is pending before the court. I suggested that both groups of devotees remain calm but I regret to say that they have failed to follow my advice," Gurusidda Rajayogindra Swamiji said.