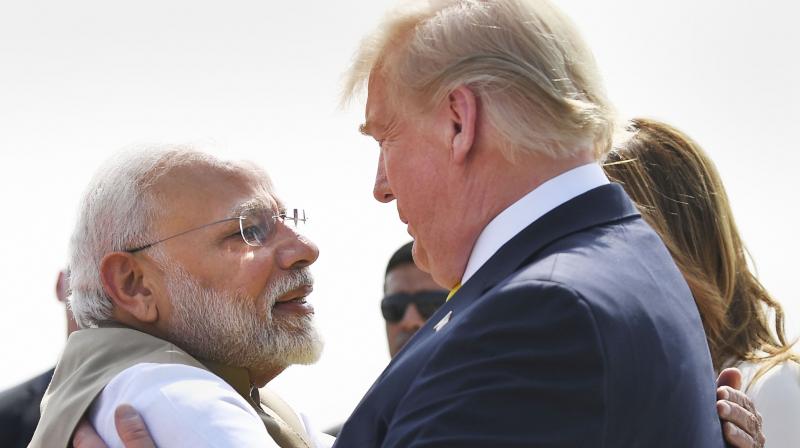 Ahmedabad: U.S. president Donald Trump kicked off his state visit to India to a breathless start, with a speech at the Namaste Trump event in Ahmedabad with a series of statements giving an inkling into the real hard purpose of the talks Americans will have with their Indian counterparts in New Delhi tomorrow.

“We will seal defence deals worth USD 3 billion on Tuesday,” the U.S. president revealed in his speech at the Motera stadium. The defence deals, which he pushed through to the U.S. Congress before announcing his visit to India, are related to purchases by India of advanced helicopters and air-defence systems.

The speech also underlined the strategic purpose of the Indo-U.S. ties at this juncture. “We are quickly revitalising our alliances all around world,” said Trump.

While praising India for “embracing individual freedom, rule of law, dignity of every human being” he also worked in the religious freedom bit, saying India is “where people worship side-by-side in harmony.”

Prior to his departure to India, White House officials indicated that the status of religious freedom in India would definitely come up in the talks, if not substantively but certainly as leverage.

There were also some silly-side references in Trump’s speech, meant for the media to work up the hype surrounding this visit,

“India produces 2000 films yearly, including great romantic movies like DDLJ.” That DDLJ, standing for Dilwale Dulhaniya Le Jayenge, is a reference to a 1991 film. It’s the kind of reference White House speech writers work in to cater to the writers of one-liners in TV channels.

The U.S. president also made a forecast for India, that “extreme poverty in your country will be eliminated in the next 10 years.”

The speech was delivered against the backdrop of a rather delirious crowd assembled by Narendra Modi’s backroom staff as a return favour to Trump for his effusive praise of the Indian prime minister at the Howdy Modi fest held by friends of Modi in Houston, Texas last year.

As a statement of policy nuances, it would have limited use but it was an attempt to go with feelgood sense both sides want to impart to this visit.