The police lobbed teargas shells and resorted to a mild lathicharge to bring the situation under control. 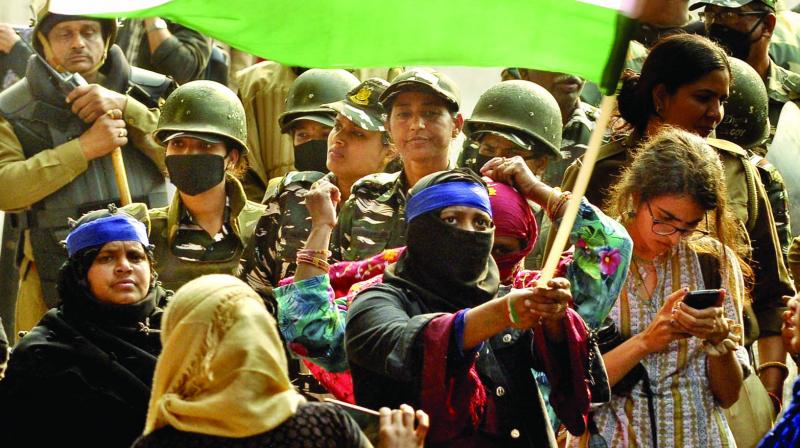 New Delhi: Several people sustained minor injuries following a clash between pro- and anti-Citizenship (Amendment) Act protesters near northeast Delhi’s Jaffrabad area on Sunday. The police lobbed teargas shells and resorted to a mild lathicharge to bring the situation under control. Later in the evening, the police took out a flag march to maintain law and order in the area.

The clash erupted at around 3 pm when the two groups started throwing stones at each other. All this happened in the presence of a heavy police contingent in the area. Witnesses said 500-odd people, mostly women, had gathered to protest against the new citizenship law. The protesters had also gathered in the area on Saturday night demanding that the new law be taken back.

As the anti-CAA group was shouting slogans against the new law, some people turned up shouting “Jai Shri Ram” slogans. “Suddenly, some people came and started throwing stones at the people gathered in the area,” an eyewitness told this newspaper. Soon, both the groups indulged in stone-throwing, forcing the police to resort to a lathicharge. The police also lobbed teargas shells to disperse the crowd.

The trouble escalated further as BJP leader Kapil Mishra decided to hold a rally backing the new citizenship law. Mr Mishra, who arrived near Jaffrabad Metro station, demanded that the anti-CAA protesters be removed from the road. After some time, some people came from a nearby street and started pelting stones.

Tension prevailed in the area as the protesters blocked the road near the Jaffrabad Metro station that connects Seelampur with Maujpur and Yamuna Vihar.

A woman, who identified herself as Bushra, had said that till the time the CAA was not revoked, the protesters would not leave the site. Social activist Faheem Baig  said there was resentment among people over the way the government was handling the issue.

“This protest is against the CAA, NRC and also seeking reservation for dalits. The movement is primarily led by women, while the men are only supporting them,” said Shadab, one of the protesters. “We have blocked the road in order to protest and we will not move from the site till the Centre revokes the draconian law,” he said.

In the evening Alok Kumar, joint commissioner of police (eastern range), said stones were also pelted at the police. “The situation has been brought under control. Adequate personnel have been deployed and are conducting flag marches.”

Mr Mishra tweeted: “We have given a three-day ultimatum to the Delhi police to get the road cleared. Get the Jaffrabad and Chandbagh road cleared.”

“Till US President is in India, we are leaving the area peacefully. After that we won’t listen to you (police) if the roads are not vacated by then,” he told the gathering.

The fresh sit-in protest comes at a time when efforts are on to negotiate with the protesters at Shaheen Bagh, whose agitation has led to traffic snarls along the Delhi-Noida route. A small stretch of the road closed for over two months was “opened” by a group of demonstrators on Saturday, but police barricades remained on one side.