India   All India  24 Feb 2020  Ba and Bapu: Was Kasturba the force behind Mahatma?
India, All India

Ba and Bapu: Was Kasturba the force behind Mahatma?

It is replete with a naturally woman-friendly spirit that softens the stark realities of gender relations in our society. 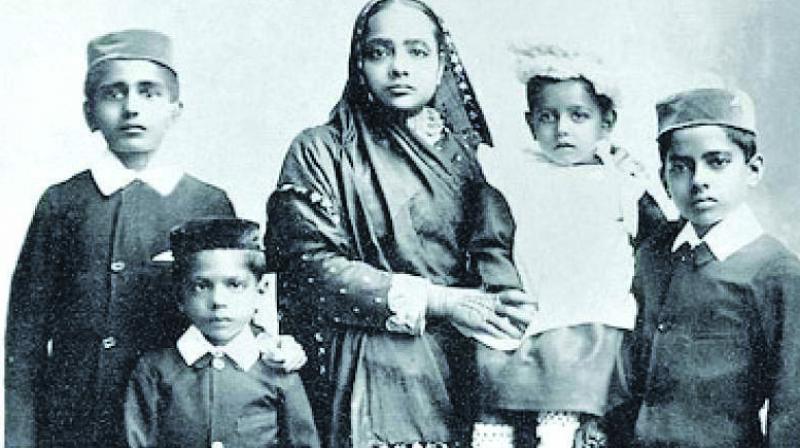 Kasturba and her sons, Harilal, Manilal, Ramdas and Devdas

It is said behind every great man there is a woman, in the case of Mahatma Gandhi by his own admission it was his wife Kasturba.

Way back in the early twenties of the last century the world learnt of a son and a husband who poured his heart out in the pages of his autobiography, which he called The Story of My Experiments with Truth, regarded as one of the most outstanding book of all times. It is replete with a naturally woman-friendly spirit that softens the stark realities of gender relations in our society.

Gandhi has acknowledged the debt of his mother, wife, the black women in South Africa and the suffragette struggle of British women in 1906-1907 as influences on the evolution of his concept of satyagraha for which he is revered across the world.

In his writings and outpourings, Gandhi transcends the boundaries that hide private from public and emerges as the foremost name on the small list of those illustrious and sensitive men of the 20th century who have spontaneously empathised with the women’s cause.

Gandhi made his inner sentiments public in an age when such confessions were frowned upon. Kasturba entered his life at a very tender and impressionable age. She was his adolescent bride to whom he was passionately attached. In his later life he was “ashamed for this attachment”. Through the pages of his autobiography, we see the blossoming of a teenage girl into a woman with a “mind of her own”. While putting up with an “obstinate” “tyrant” of a husband, she tenders him love and care and goes on to earn his admiration and appreciation. Neither of them realised when and how their private and public concerns converged at a point from where they both set on a journey which would only take them on to the highest level of conjugal love which is the preserve of only the enlightened few.

Gandhi’s autobiography also reveals the steel hidden in that soft and self-effacing façade that Kasturaba projected so effectively in later years. If she did ultimately acquiesce to Gandhi’s ideals and endeavours, it was only after careful appraisal and self-examination. And if Gandhi managed, in the initial years of marriage, to fit the stereotype of the “tyrannical husband”, during the thirties and after, he looked up to Kasturba as a strong life-partner, without whose constant support, his “mission would have been left unaccomplished”.

An important frame in Gandhi’s autobiography is the picture of Kasturba as bewildered and unable to comprehend the change that was going over this barrister so much dressed like a European and living a similar life, with a governess for his children. He now changes his style of living, dispenses with servants, engages himself in public activities, undertakes protests, suffers police brutality but does not retaliate, goes to jail and has all sorts of visitors. The duty to provide them with hospitality taxes Kasturba’s fortitude and health. At one point when the reformist husband forces her to clean the toilet of his visitor, Kasturba says enough is enough. Then there follows a violent conflict between the two.

The quarrel reaches its peak with Gandhi asking his wife to quit the marriage. Then she retaliates and a repentant Mahatma goes over the entire politics of the man-woman relationship. He sees his conduct as wrong, which leads him to think of the general condition of women, and the subordinate position to which women are forced into in Indian society. It is here that we find changes in his attitude towards women. The incident provides him with a reformist impulse as strong as the one that accompanied his ejection from the first class compartment of a train in South Africa. Gandhi’s recollections in his book is no superbole, it is factual, almost devoid of emotion. Kasturba had shaken him to his core by her words. He describes this incident thus:

“The tears were running down her cheeks in torrents and she cried, have you no sense of shame? Must you so far forget yourself? Where am I to go? I have no parents or relatives here to harbour me. Being your wife, you think I must put up with your cuffs and kicks? For heaven’s sake, behave yourself, and shut the gate. Let us not be found making scenes like this! I put on a brave face, but was really ashamed and shut the gate. If my wife could not leave me, neither could I leave her. We have had numerous bickerings, but the end has always been peace between us. The wife, with her matchless power of endurance and tolerance, has always been the victor.”

It is significant to note that the Mahatma himself terms this recollection as “sacred” which reveals how much he values it.

Gandhi is said to have admitted to John S. Hoyland that he learnt the lesson of non-violence from Kasturba when he tried to bend her to his will. “Her determined submission to my will, on the one hand, and her quiet submission to suffering my stupidity, on the other, ultimately made me ashamed of myself and cured me of my stupidity in thinking that I was born to rule over her; and in the end she became my teacher in non-violence.”

In Gandhi’s evolution as the upholder of the women’s cause, his sojourn in South Africa was his nursery where seeds of many of his ideas were sown and it was also his laboratory where they were put to test. Above all, South Africa brought Kasturba to the forefront. It was as though Gandhi rediscovered her. Her active participation along with hundreds of other women of the Phoenix and Tolstoy farms who joined the men in a satyagraha to protest against the immigration regulation bill and the three pound tax enthused Gandhi no end. Gandhi was overwhelmed at the grit and determination displayed by women in their fight for rights in South Africa. Hailing the women’s resolution to oppose the South African government’s move to declare all marriages not performed under Christian law null and void, he wrote in Indian Opinion: “The remarkable resolution of the Indian women of Johannesburg on the marriage question that has been agitating our countrymen for the past few weeks marks an interesting development of the passi
ve resistance campaign. We congratulate our plucky sisters who have dared to fight the government rather than submit to the insult offered by the judgment.”

In more sense than one, Kasturba was the Mahatma’s first disciple. She adjusted herself to a routine that went against her own orthodoxy.

Reginald Reynolds in his The True Book about Mahatma Gandhi acknowledges Kasturba’s contribution in the making of the Mahatma in no uncertain terms. “In spite of his having been such a little tyrant with his wife as a boy and as a young man, he had also come to have a great respect for women.”

But ultimately, it was Kasturba who was the unsung heroine. She was the staff without whose support the metamorphosis of Mohandas Karamchand Gandhi into the Mahatma would have remained an abortive endeavour. She was the silent but strong presence who helped him forge his unique, unconventional ammunition for the attainment of swaraj — both personal and political.

It is amazing how some deep-rooted misconceptions about the personal relationship between Mahatma Gandhi and Kasturba have prevailed and survived from the very beginning of their public life. I often hear from young people they do not like Gandhi because “he was very cruel to his wife”. How did they get to know about it? They have no answer. We all learnt about it only because M.K. Gandhi made an honest breast of his wrong doings.

Way back in 1929, Horace G. Alexander in a letter to Gandhi drew his attention to a book which gave him an impression that Kasturba and Gandhi “were not always of one mind”. Horace Alexander, among other things, wrote: “The biggest stumbling block of appreciation of the East comes from the belief that Eastern people have not learnt the same reverence for women as we have now begun to learn in the West.” In his reply, Gandhi wrote: “I can tell you that the relations between us are of the happiest kind. It is quite true if the writings gave you the impression that I do not carry my wife with me through all the transformations that my life has undergone.”

During their last imprisonment, Kasturba and Gandhi were interned in the Aga Khan Palace in Pune, where Gandhi, the guru (teacher) and loving husband, come in for a most harmonious fusion. The guru does not lead nor set the pace; he is submerged in the caring husband.

The confluence of dynamic and dedicated women at Gandhi’s ashrams, presided over by “Ba”, made them develop into centres for rural regeneration and self-reliance. It is this legacy bequeathed by “Ba”, which the Kasturba Memorial Trust founded by Mahatma Gandhi in 1945 in the memory of Kasturba who passed away on February 22, 1944, while still in prison. In this series the one built on the Sarania Hills in Guwahati deserves special mention, as it was inaugurated by Gandhi himself on January 9, 1946. Bapu lit a lamp and blessed the seven young gram sevikas: “For this you have to be bold, self-reliant and would have the guidance of Amol Prova…”

In 1946, Mahatma Gandhi visited Assam for the last time. A small cottage made of bamboo and mud was erected for him. It still stands there at the Sarania Ashram and is called Gandhi Ghar.

The story of Ba and Bapu needs to be told and retold, as they are important in our long history of misogyny, significant as a ray of hope in an otherwise irredeemable scenario. Mahatma Gandhi’s leadership was his own but would not have been possible but for his wife, and he was man enough to acknowledge the debt he owed to her. Eventually, Kasturba, the wife and individual woman, was subsumed for him in the personae of “the women of India”.

The writer is a former director of the Gandhi Smriti and Darshan Samiti, New Delhi