The flames were noticed just as the two-hour aerobatic display by various jet aircraft was drawing to an end around noon. 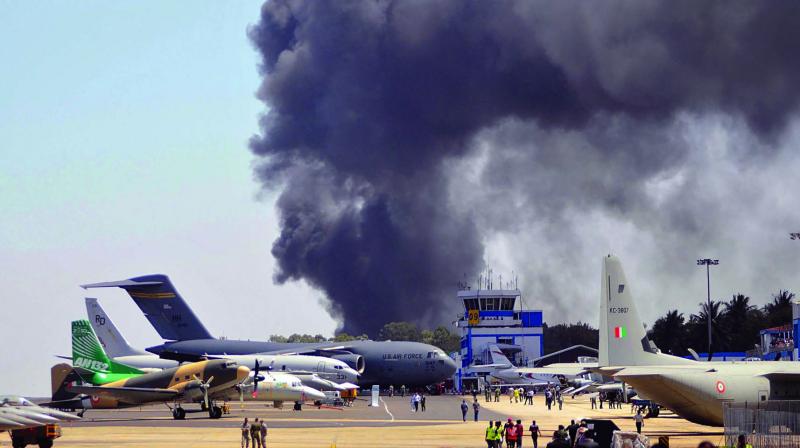 Smoke rises from the public parking lot after cars caught fire on the fourth day of Aero India 2019 at the Yelahanka Air Force Station in Bangalore on Saturday. (Photo: AFP)

Bengaluru: More than 300 cars were charred beyond recognition as a blaze swept through one of the parking areas at the Air Force Station, Yelahanka, the venue of Aero India 2019, triggering panic among thousands of visitors and invitees, and a temporary halt to flying display at the air show on Saturday.

The fire broke out in a zone reserved for visitors and away from the runway and tarmac, but with dense smoke billowing near the venue and a couple of explosions set off speculation of an air crash on the penultimate day of the air show. The flames were noticed just as the two-hour aerobatic display by various jet aircraft was drawing to an end around noon. The Indian Air Force (IAF) dispatched a helicopter for aerial assessment and to assist the fire force and other teams of Rapid Action Force and National Disaster Response Force teams in battling the inferno. “A court of inquiry (CoI) has been ordered to investigate the cause of fire at the Parking Area of Aero India 2019,” said a defence ministry spokesperson.

For residents in the vicinity of the venue, the blaze brought back memories of a mid-air collision and crash of two aircraft of the IAF’s Surya Kiran Aerobatic Team (SKAT) on Tuesday. Eyewitnesses said they heard several blasts as the fire spread through the parking area, prompting visitors to race towards the area to locate their cars.

While DGP (Fire services) M.N. Reddi said the fire was doused after a two-hour-long operation.

Top officers of the police and transport departments visited the spot and arranged transport for those who lost their vehicles. A helpdesk was also set up at the parking area where victims were asked to register their car numbers and other details.

“It was a huge fire that spread within minutes due to dry grass. The fire was followed by frequents blast which may have occurred due to explosion of car tyres and fuel tanks,” a senior fire force official told Deccan Chronicle.