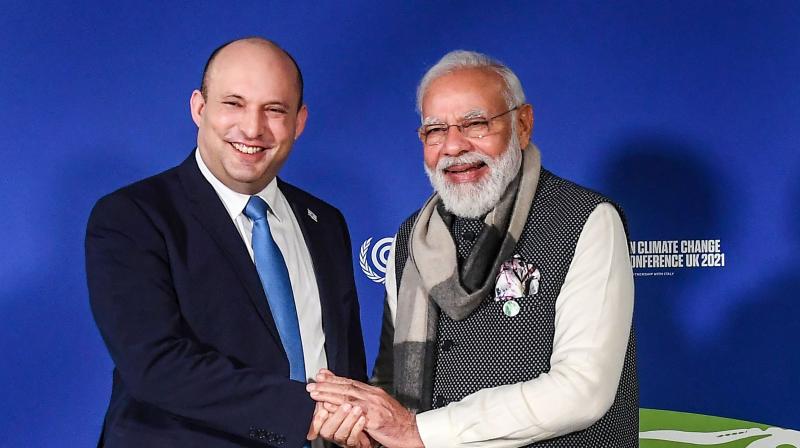 In a Webinar held for the virtual launch of a special logo to set in motion the year-long celebrations to commemorate the occasion, Gilon said he feels very lucky to be Israel's Ambassador in India when "relations are exceptional" and "beyond regular", one of "partnership between ancient civilisations".

To further deepen bilateral cooperation in diverse areas, Gilon said Prime Minister Naftali Bennett and other officials are likely to visit India as the two countries celebrate 30 years of establishment of diplomatic ties.

External Affairs Minister S Jaishankar had extended an invitation to Bennett from Prime Minister Narendra Modi during his visit to Israel last year.

"This is an important occasion to reflect on our mutual successes as well as a good opportunity to look ahead and shape the next 30 years of our relations. I am sure that our close existing cooperation in different fields will only continue to grow and flourish in the coming years, Gilon stressed.

Gilon launched the logo virtually along with his Indian counterpart in Tel Aviv, Ambassador Sanjeev Singla.

The logo features the Star of David and the Ashoka Chakra, the two symbols that adorn the national flags of both countries, and forms the numeral 30 depicting the 30th anniversary of bilateral relations.

The Israeli envoy in his speech highlighted ties going back thousands of years with no trace of anti-semitism in India, unlike in Europe and other parts of the world.

Recalling the visit of Jaishankar, Gilon mentioned India's role in shaping the region with Indian soldiers participating in the World Wars and buried in different parts of Israel.

Israel's first Prime Minister David Ben-Gurion saw India and Israel's national movement as "sister liberation movements", he said, pointing out the deep respect the Israeli leader had for Mahatma Gandhi whose picture he had on the wall of his bedroom.

Singla in his address said 2022 also marks five years of bilateral strategic partnership which was established during the historic visit of Prime Minister Modi to Israel in 2017.

The year, therefore, provides an opportunity to not only look back and take account of the bilateral achievements of the past thirty years but also the past five years when the relationship was put on a "qualitatively higher trajectory", he said.

As the two countries celebrate this milestone, it is also an opportunity to appreciate the efforts of our leaders, diplomats, thinkers, strategists and all the people who have led our partnership and continue to nurture this important relationship, Singla said.

"Our two peoples are connected by civilisational bonds that go beyond trade and economic ties. The Jewish people have thrived in India for centuries and, in fact, enriched the composite culture of India," he said.

As International Holocaust Remembrance Day approaches on January 27, the Indian envoy narrated how Maharaja Jam Sahib of Nawanagar not only saved lives of several Jewish children but providing them shelter during World War II but also took care of them as long as they chose to be under his guardianship.

Addressing the Indian Jewish community in Israel, Singla said they "form the organic link, a bridge" which "continues to grow with shared traditions, cultural practices, mutual trust and friendship".

"For the last five years our thrust has been on tapping our strengths as two knowledge economies", he asserted, highlighting deeper collaboration in research and development, innovation, artificial intelligence and quantum computing.

To create the 30th-anniversary logo, both countries launched a contest last year for students of prominent design colleges in Israel and India.

Entries were invited from Israel Holon Institute of Technology and India's National Institute of Design (NIT). NIT's Nikhil Kumar Rai's design was unanimously selected as the commemorative logo for the celebrations.

Nikhil, hailing from Varanasi, is a final year student at NIT Ahmedabad and has also studied in the Faculty of Visual Arts at Banaras Hindu University (BHU).

"I wanted my design to be simple and bold that connects audiences from both the countries", Nikhil said during the Webinar to launch the logo.

"It should depict the rich history of the two countries and also be forward-looking," he added.

The event's moderator, Dr Oshrit Birvadker, said the special logo symbolises the strong friendship, love and admiration that exists between the people of Israel and the people of India.

"It also depicts the growing strategic partnership between the two sides," Birvadker said.