Nobody can stop us from removing Modi in 2019 LS polls: Rahul

Targetting Modi over demonetisation carried out in November 2016, Rahul said it was the biggest scam in Indian history. 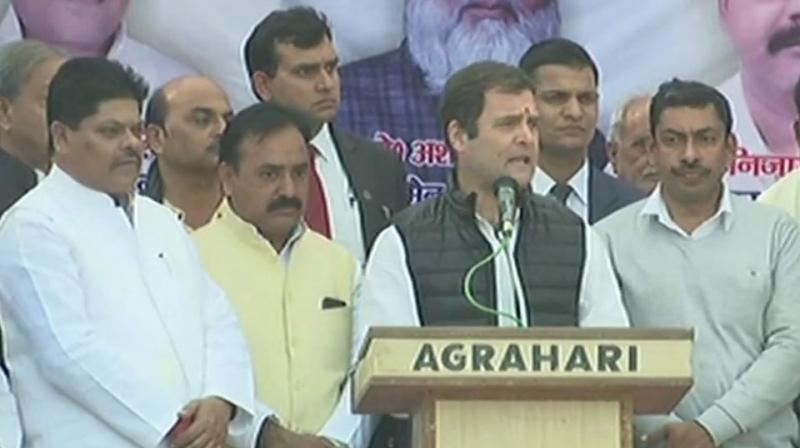 The Congress chief was addressing a public meeting here before returning to Delhi at the end of his two-day visit to his Lok Sabha constituency. (Photo: ANI | Twitter)

Rae Bareli: Escalating his attack on Prime Minister Narendra Modi, Congress president Rahul Gandhi on Thursday described him as the "symbol of hatred" and said nobody can stop us from removing him in the upcoming Lok Sabha elections.

On a visit to Rae Bareli, the Lok Sabha constituency of his mother Sonia Gandhi, he again raked up the issues of Rafale, demonetisation, GST, unemployment and farmer loan waivers while targetting Modi.

"I want to tell you nothing can be achieved from hatred, it only causes destruction. The meaning of Narendra Modi is hatred. He is the symbol of hatred. We are going to remove him and nobody can stop us," he said while addressing a gathering here.

Referring to the removal of Alok Verma as CBI director, Rahul said: "He (Modi) travels around the county and claims to fight against corruption. But when the CBI wanted to investigate, the Director (Alok Verma) was removed from his post at 1:30 am. The Supreme Court reinstated the director but again he was removed from the post."

Verma was shunted out of the CBI on January 10 by the Selection Committee after a meeting attended by the Prime Minister, Congress leader Mallikarjun Kharge and senior Supreme Court judge Justice AK Sikri.

Targetting Modi over demonetisation carried out in November 2016, Rahul said it was the biggest scam in Indian history.

"Earlier, the slogan of the government was 'achhe din aayenge' but now it is 'chowkidaar chor hai'.  Demonetisation is the biggest scam in Indian history. You all stood in front of ATMs, but none of the influential people stood there. All innocent and hardworking people suffered," he claimed.

Rahul further claimed that the Prime Minister "lied" on a number of issues, including Rafale deal and food park in Amethi.

"Influential people do marketing for Modiji. He gave Rs 30,000 crore to Anil Ambani. Everyone knows HAL has contributed a lot to the country’s defence. We had promised loan waivers and we implemented that, I don't lie, unlike Narendra Modi. I want to promise you that food park which was halted by Modi ji will be built here in Amethi, 101%," he added.

With regards to unemployment, Rahul said Congress governments in Madhya Pradesh and Chhattisgarh have already started creating jobs for locals.

"China gives 50,000 jobs in 24 hours, while India gives 450 jobs in every 24 hours. We asked for one GST rate, but Modiji imposed 5. The government demolished small industries," he claimed.

On the appointment of Priyanka Vadra as the General Secretary in-charge of Uttar Pradesh East and Jyotiraditya Scindia to Uttar Pradesh West, Rahul said the two leaders have been given a mission in their new roles.

He also reaffirmed that Congress will contest in Uttar Pradesh with full strength.