'Of course, our mission is to see Rahul as PM 2019 LS polls': Kumaraswamy

'My party's decision is we want to support Rahul as PM candidate. This is our commitment and it remains so," said Kumaraswamy. 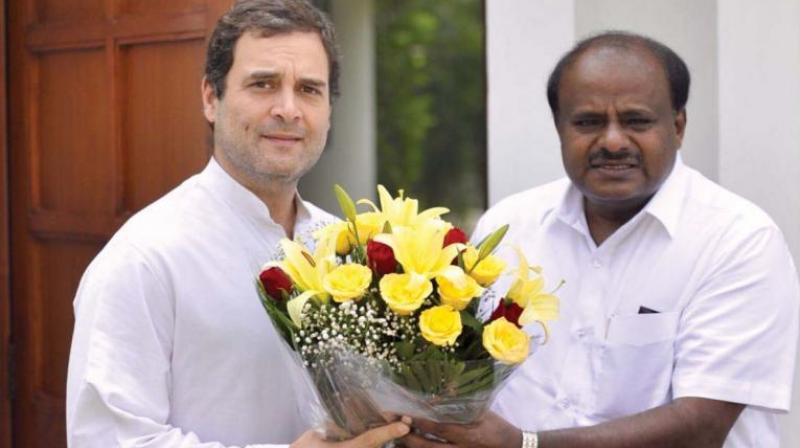 Karnataka Chief Minister was among the various leaders who were present in Mamata Banerjee’s opposition unity rally on Sunday. (Photo: File)

Bengaluru: As the opposition’s ‘Mahagathbandhan’ confronts a question of “who will be the prime ministerial candidate”, one of the key players says his party’s mission remains to see Rahul Gandhi at the top post after 2019 general elections.

Karnataka Chief Minister HD Kumaraswamy said that Janata Dal-Secular will work towards the goal to see Rahul Gandhi at the top post, even though he had recently said Mamata Banerjee is an able candidate.

"My party's decision is we want to support Rahul Gandhi as the prime ministerial candidate. This is our commitment and it remains so," said Kumaraswamy, who heads a coalition government with the Congress in Karnataka.

Kumaraswamy clarified that his statement is taken out of context and said that he meant among the regional parties there are several capable leaders other than the BJP. He added he has confidence in Rahul Gandhi that he can take on PM Modi.

PM Modi was "only a paper tiger", he said, and Rahul Gandhi had matured as a politician.

"Modi-ji speaks well, his presentation is good, he uses social media but what is his achievement in the last four years," Kumaraswamy said.

Karnataka Chief Minister was among the various leaders who were present in Mamata Banerjee’s opposition unity rally on Sunday.

The Congress has said it will not project its chief Rahul Gandhi for the top post and will respect the wishes of its coalition partners if the BJP is defeated in the national election.