V Sunil Kumar also termed polls to Bantwal, in the communally sensitive Dakshina Kannada district, as a 'question of Hindu self esteem'. 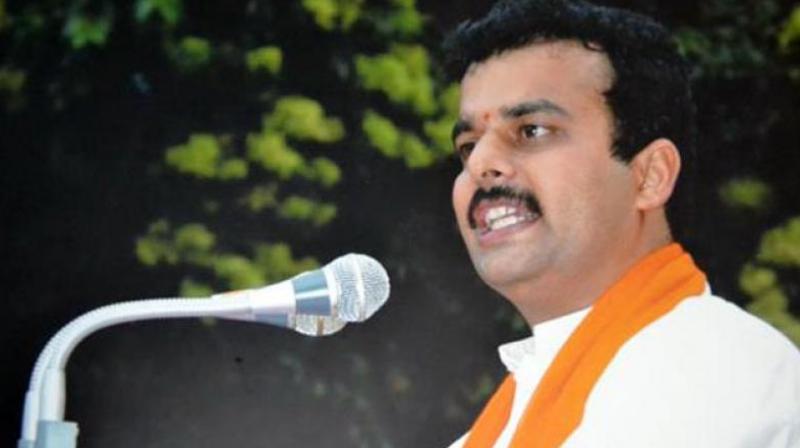 BJP MLA V Sunil Kumar, representing Karkala in the assembly, said 'This election is a question of Hindu self esteem'. (Photo: Facebook)

Bengaluru: A BJP MLA in Karnataka has said the contest in Bantwal constituency during the coming assembly polls will be between Allah and Lord Rama as he joined issue with a state Minister who credited his successive wins from the segment to Allah and Muslims.

V Sunil Kumar, representing Karkala in the assembly, also termed the election to Bantwal, in the communally sensitive Dakshina Kannada district, as a "question of Hindu self esteem".

Assembly elections in Karnataka are due early this year.

Kumar made the remarks reacting to comments made by Bantwal MLA and Minister Ramanatha Rai recently crediting his successive elections from the constituency to the grace of Allah and secular credentials of Muslim community there.

Rai had recently said, “if I have got an opportunity to become legislator from Bantwal assembly constituency for six times, it is because of the grace of Allah and secular stand of Muslim community here.”

Addressing a BJP rally in Kalladka on Monday, Kumar said, “This election is a question of Hindu self esteem. I read in the paper and I was surprised, a legislator who got elected from this constituency for six times has said that he has won because of the grace of Allah.”

Kumar said, “I request friends here, the election here is not between Rajesh Naik (BJP) and Ramanatha Rai; it is an election between Allah and Rama. Whom, Bantwal wants it has to be decided. Whether we will repeatedly make Allah win or will we make a person who loves Rama win, people of Bantwal has to decide.”

This will be the election issue in Bantwal this year, Kumar, who is also BJP's chief whip in the assembly said.

“A person who has won for six times, if he says he doesn't want Hindu votes it is a question of our pride. Who will win is a question of pride not only for Bantwal, but to the whole district,” he added.