India   All India  24 Jan 2018  Ahead of poll season, rift in CPM intensifies
India, All India

Ahead of poll season, rift in CPM intensifies

Yechury made no offer to quit party post: Karat 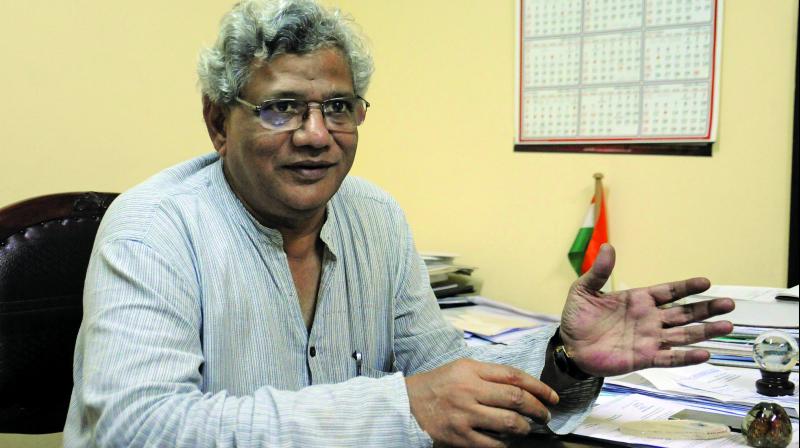 New Delhi: The factional feud in the CPI(M) intensified on Tuesday with former general secretary Prakash Karat saying that the current party boss Sitaram Yechury made no offer to resign at the party’s central committee meeting where the latter’s proposal for a political alliance with the Congress was voted out. However, Mr Yechury contradicted him saying he had indeed offered to quit at the party politburo meeting and mentioned the same at the central committee meeting, but had been asked to continue.

Meanwhile, party ideologues and top CPI(M) leaders have come out in support of Mr Yechury’s proposal for an electoral alliance with Congress for 2019 general elections.

Two days after the rather unprecedented CPI(M) central committee meeting, where two drafts of the political tactical line were presented and the one by Mr Yechury was voted out by a margin of 55-31, Mr Karat said in an interview to a news portal that the differences with Mr Yechury were not personal, but ideological in nature and there was no offer from the general secretary to quit his post.

However, Mr Yechury rebutted this. “I had offered to resign from both politburo and central committee. But the CC and PB unanimously said such a move will send a wrong signal. The party will be seen as divided on the eve of party congress and Tripura elections. I abided by the decision,” Mr Yechury told this newspaper.

Mr Karat’s claim had come after murmurs in a section of the party that the difference between the two leaders are more of a personal nature as both the drafts have very little or “nuanced” difference. The only difference was whether the Congress was needed in any fight to defeat the BJP.

Meanwhile, a host of party ideologues came out in support of the Yechury line. They felt that the alliance should be formed for a “larger cause” which is “defeating BJP.”

While former Speaker Somnath Chatterjee accused Mr Karat of reducing the party to a regional outfit, documentary filmmaker Anand Patwardhan on his Facebook page accused him of playing the role of BJP’s B Team.

“Shame on Prakash Karat and his team for rejecting Mr Yechury’s idea of a CPM tieup with Congress in 2019,” he wrote and then added, “So how many B teams does the BJP have? Nitish Kumar is a proven one. Yesterday even Congress acted like a B team by attacking AAP at the behest of a puppet Election Commission.”

Speaking exclusively to this newspaper, Mr Chatterjee said: “Karat has ensured that CPI(M) becomes a regional party. A Left party which is working in the Parliamentary system has to take in to account a lot of considerations. The party is becoming almost non-existent in the Rajya Sabha as well as the Lok Sabha”.