Jallikattu: NHRC notice to TN police over 'arson' by cop

The Commission observed on the basis of media reports that unprovoked police action amounts to violation of human rights. 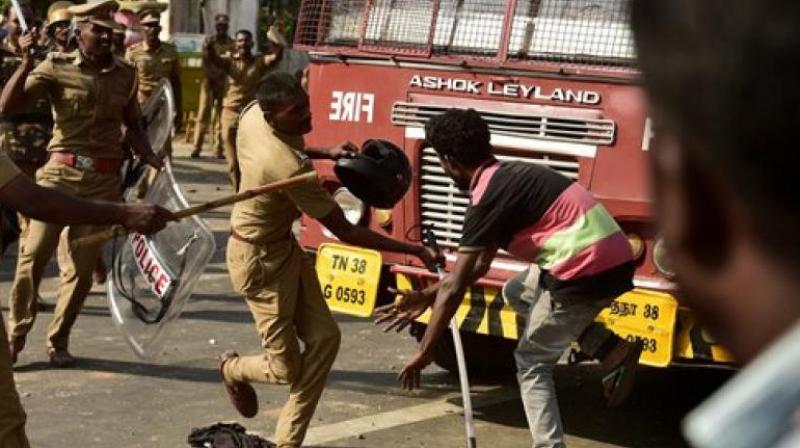 Pro-Jallikattu protesters during a violent clash with the police near Marina Beach in Chennai on Monday. (Photo: PTI)

New Delhi: The National Human Rights Commission (NHRC) on Tuesday took suo motu cognisance of media reports that after the passage of the Prevention of Cruelty to Animals (Tamil Nadu Amendment) Bill, 2017 in the State Assembly, the state police, without any prior caution, resorted to beating, arresting and damaging private property in order to disperse a large number of people gathered at landmark places in Chennai in support of Jallikattu.

It has taken a serious view of the unprovoked police excesses and has issued notices to the Chief Secretary, Director General of Police, Government of Tamil Nadu and Chennai Police Commissioner calling for reports in the matter within two weeks.

The Commission observed on the basis of media reports that unprovoked police action amounts to violation of human rights.

“Visuals on television news channels as well as videos on social media show that police set on fire huts, autos, motor cycles, vegetable shops on streets and other properties in streets in Chennai. Bleeding students ran for their life. Police even entered into the houses and started beating people indiscriminately. The police blocked the major routes leading to Marina Beach as well as Chennai city,” the Commission observed.

The people of Tamil Nadu, particularly in Chennai, had been conducting protests over a week demanding conducting of 'Jallikattu', a sport associated with 'Pongal' festival reflecting Tamil culture.