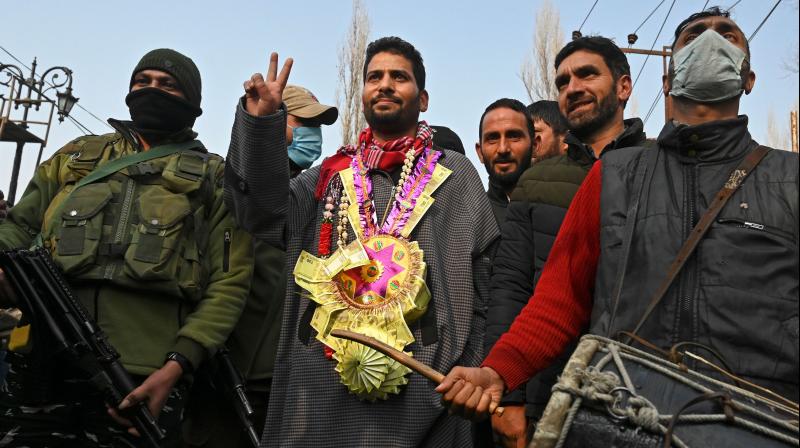 Srinagar: The People’s Alliance for Gupkar Declaration (PAGD), a conglomerate of J&K’s mainstream regional Opposition parties and their allies from the national Left parties, is poised to win big in the Union territory’s first-ever District Development Council (DDC) elections.

However, its arch-rival, the BJP, has also performed well, mainly in the Jammu region. What is also spectacular for the saffron party is that it has won an election for the first time from any seat in the predominantly Muslim Kashmir Valley.

The PAGD led by former chief minister Farooq Abdullah won 70 of the 177 seats the results of which were declared till this report was filed and is leading in over 40 seats. A total of 48 seats have gone to the BJP, while its candidates have a comfortable lead over their rivals in over 30 seats.

The Jammu and Kashmir Apni Party (JKAP), known in local political circles as the BJP’s tacit ally, has bagged seven seats and the Congress 14 seats. One seat has gone in favour of the National Panthers Party. The Independents –some known to be proxies of the BJP -- and others too have made a mark by winning as many 38 seats so far.

Former chief minister Omar Abdullah termed the results an eye-opener for the BJP and its “proxy political party” (an obvious reference to JKAP), and said the people had rejected the Centre’s move to strip J&K of its special status and splitting it up into two Union territories in August last year. Earlier, in a tweet, he also said: “The trends that have emerged in the DDC polls in J&K are very encouraging for the @JKPAGD. The BJP had made this election a prestige issue about Art 370 & J&K’s special status. The people have now spoken & it’s for those who believe in democracy to pay heed to these voices”.

Among the PAGD winners is Waheed Ur Rehman Parra, a youth leader of its constituent People's Democratic Party (PDP), who was arrested by the National Investigation Agency on charges of helping separatist militants on November 25, a day after he filed his nomination papers from home district Pulwama. Mr Parra polled 1,323 votes, defeating his nearest BJP rival Sajad Ahmad Raina by a margin of 1,002 votes. PDP president and former CM Mehbooba Mufti tweeted: “Couldn’t be prouder of PDP’s @parawahid who won his maiden election by a huge margin of votes. Despite being arrested on baseless charges right after filing his nomination people have shown their love & trust for Waheed. Hope justice prevails.”

The BJP’s victors from the Valley are Aijaz Hussain (Khonmoh-II seat in DDC Srinagar), Aijaz Ahmad Khan (Tulail seat in Bandipora district) and Minha Latief (Kakapora (Pulwama). After being declared winner, Mr Hussain told reporters outside the counting centre: “This is a win for the BJP. The propaganda has been bust as people have shown their faith in the Prime Minister and his policies. This is a message that nationalists are prospering in Kashmir.”

However, among the BJP’s prominent losers is its spokesman Altaf Thakur, who finished third in Dadsara segment of Pulwama DDC. Mr Thakur bagged 235 votes as against 246 polled by Independent Avtar Singh, whereas PAGD nominee Ali Muhammad Butt secured 243 votes.

These are the first elections held in J&K after the abrogation of Article 370. PAGD was formed initially by seven mainstream parties to seek restoration of the erstwhile state’s special status. However, the BJP termed its launch as a “conspiracy” against the people of J&K.

Omar Abdullah, after the PAGD’s fabulous performance in the DDC elections, said it “is an alliance that emerged out of the betrayal of the people of J&K on 5th Aug 2019. We have faced every obstacle -- illegal detentions, agency threats & pressures, our candidates were locked up to stop them campaigning & from all this we are emerging victorious”.