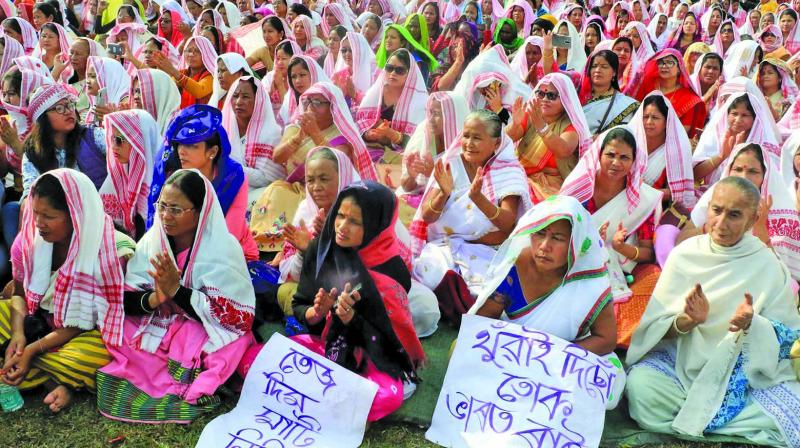 Women sit on a protest during a demonstration against the Citizenship Amendment Act and NRC in Namrup, Assam, on Sunday. (Photo: PTI)

Bhopal: The district headquarters of Jabalpur in Madhya Pradesh, which witnessed a pitched battle between police and people protesting the Citizenship Amendment Act (CAA) on December 21, leading to the imposition of curfew in the town, on Sunday limped back to normalcy with no untoward incidents reported from anywhere in the region.

The curfew was relaxed for seven hours in the afternoon in the town to enable locals to buy essential commodities as normalcy was restored in violence-prone areas under four police stations in Jabalpur.

Internet service, which were suspended following the incident, was also restored in the town on Sunday, a spokesman of Jabalpur district administration said.

On Saturday, two ministers of the Kamal Nath government held a meeting with leaders of various communities to defuse the situation and restore peace in the town.

“Entire Madhya Pradesh barring Jabalpur town has remained peaceful. There was trouble in Jabalpur because it is the home town of a senior BJP leader,” he quipped.