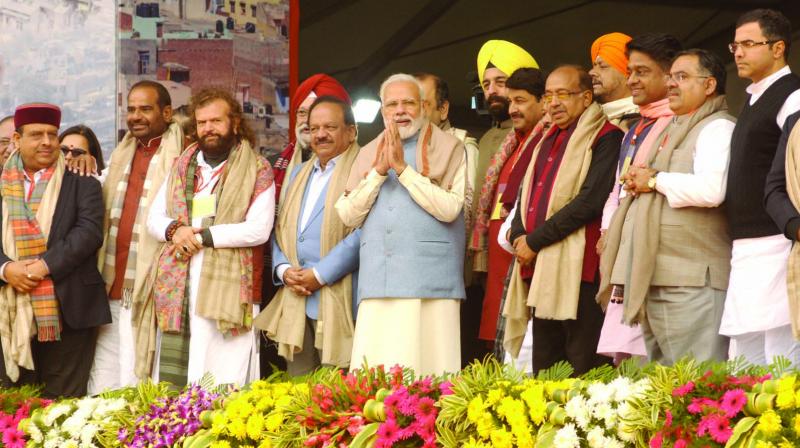 New Delhi: Amid countrywide protests against the amended Citizenship Act and the National Register of Citizens that has resulted in 22 deaths across Uttar Pradesh, Assam and Karnataka, Prime Minister Narendra Modi on Sunday blamed “urban Naxals” and Opposition parties of launching a campaign of misinformation to target him. And, in a stunning assertion that sent social media into a tizzy, said that there has never been any official discussion of implementing the NRC across the country.

Accusing his political rivals of stoking fear among people and misleading Muslims over the amended citizenship law, the Prime Minister asserted that his government’s schemes have never discriminated on the basis of religion. He charged that Opposition leaders, unable to challenge him politically, have resorted to dividing the country through their vote bank politics, lies and rumours.

Addressing a rally at the Ramlila Maidan in the national capital, barely a kilometre from Old Delhi’s Daryaganj area that was hit by violence two days ago, he said the Citizenship (Amendment) Act (CAA) and the NRC have nothing to do with Indian Muslims or any other Indian citizens.

“The citizenship law or the NRC have nothing to do with Indian Muslims or Indian citizens. They have nothing to worry,” he said and added, “We have never asked anyone if he goes to temple or mosque when it comes to implementing our schemes… Muslims are being misled and I have always ensured that documents will never come in way of development schemes and their beneficiaries”.

Hitting out at the “rumours and lies” being spread on CAA and NRC, Mr Modi said that there has been absolutely no discussion on a nationwide NRC.

“I want to tell the 130 crore people of India that ever since my government came to power in 2014... from then until now... there has been no discussion on NRC anywhere... we only had to implement it in Assam to follow Supreme Court directives,” PM Modi said in a combative, over 90-minute speech.

Several Opposition leaders responded to Mr Modi’s claims that they said were false. On Twitter, several politicians made comments and attached clips of Union home minister talking of implementing the NRC across the country, including in the Parliament on December 10.

Attaching a clip of Mr Shah speaking in Parliament, Hyderabad MP Asaduddin Owaisi questioned the Prime Minister’s statement. “Today, Modi said there has been no discussion on nation-wide NRC and that lies are being spread to mislead us,” he tweeted. Who’s lying? If Amit Shah is wrong, then it is breach of Parliamentary Privilege and a clear case of misleading the House. Who should we believe?”

Mr Shah has spoken of the government’s plan to introduce a nationwide NRC on several occasions, even linking it to the citizenship law. On May 1 at a rally in Bongaon, West Bengal, Mr Shah called infiltrators “termites”, and again explicitly linked the amended citizenship law with NRC to target them.

Defending the CAA, Mr Modi said that it is about giving rights to persecuted minorities from neighbouring countries and does not snatch anybody’s rights and asked people at his rally to stand up to show respect for the Parliament and lawmakers who passed the Citizenship (Amendment) Bill.

Mr Modi, who began his speech with the slogan of “Vividhta me ekta, Bharat ki visheshta” (Unity in diversity is India’s speciality), tried to allay the concerns of Muslims by saying that they should look at his “track record” and not listen to the “tape record” of his rivals.

Exactly a week ago, on December 15, Mr Modi had, while condemning protests that began in Assam against CAA, said: “People who are setting fire (to property) can be seen on TV... They can be identified by the clothes they are wearing.”

In Delhi on Sunday, he again accused anti-CAA and anti-NRC demonstrators of violence and vandalism and praised the police force for doing its job diligently.

Strongly condemning the violence during the ongoing protests against CAA, he attacked the Opposition for not making any appeal for peace and said their silence showed their indirect support to vandalism targeting school buses and trains.

He also said that 33,000 police personnel had laid down their lives in the line of duty since Independence but were now being attacked.

Smiles were seen on the faces of security personnel deployed on the ground as the Prime Minister talked of their sacrifices and the audience chanted “Zindabad” for Delhi Police.

The Prime Minister made no mention the police attacking students of Jamia Millia Islamia University, Aligarh Muslim University, and various other instances of police brutality on protesters in several states since the anti-CAA protests began.

Taking on Opposition parties like the Congress, AAP, TMC and the Left over their protests against the law, Mr Modi quoted comments of former Prime Minister Manmohan Singh and Rajasthan chief minister Ashok Gehlot in support of giving citizenship rights to persecuted minorities from neighbouring countries and said that his government has done what was promised by them (Opposition party) when it was in power, but was never done due to vote bank politics.

“My rivals should burn my effigy if they hate me but they should not target the poor,” PM Modi said.

The CAA, which is applicable to all states and Union Territories with exceptions as may be applicable, seeks to grant citizenship to make illegal migrants who may be Hindus, Sikhs, Buddhists, Jains, Parsis and Christians from Afghanistan, Bangladesh and Pakistan. The NRC, on the other hand, seeks proof of citizenship from all Indian citizens prior to a cut-off date. In Assam, the documentation required is before the midnight of March 24, 1971.

Taking a dig at Trinamool Congress president Mamata Banerjee’s demand for UN-monitored referendum on CAA and NRC, Mr Modi said that “Mamata Didi, shidi hi Vienna aur UN chali gayi (Mamata Didi went directly to Vienna and UN)” and pointed that she used to speak in Parliament against infiltration into the state but changed her stand due to vote bank politics. “These leaders changed their stand and all their love and sympathy for these refugees vanished,” he pointed.

Referring to the support he has received from Muslim countries and civilian honour bestowed on him by many of them, the Prime Minister said that this has scared the Congress and its friends as they are worried that if “Muslims across the world support me so much, then how long they can frighten Indian Muslims (against him)”.

Mr Modi made no mention of the 22 deaths in protests since Rajya Sabha passed the Citizenship (Amendment) Bill on December 11. Of the 22 dead, 17 died in Uttar Pradesh and two in Karnataka, both BJP ruled states.