6-month-old among 9 killed in fire in Delhi's Kirari: officials

The fire was brought under control by 3.50 am, a Delhi Fire Service official said. 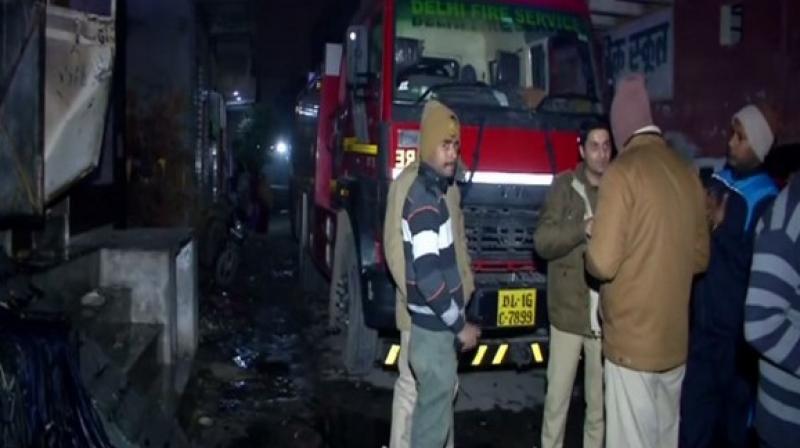 New Delhi: A massive fire ripped through a three-storey residential-cum-commercial building in outer Delhi's Kirari area, killing at least nine people, including three children, the Delhi Fire Services (DFS) said on Monday. Eight fire tenders were rushed to the spot after a call of a fire at a house was received at 12.30 am.

The ground floor of the building housed a godown for clothes while the other three floors were residential in nature, according to the fire services.

The blaze was brought under control by 3.50 am, a DFS official said.

Earlier this month, 43 people were killed in a fire in a four-storey building housing illegal manufacturing units in north Delhi's congested Anaj Mandi area. In the Kirari fire incident, three people were rescued. Pooja (24) and her daughters Saumya (10) and three-year-old Aaradhya jumped to an adjacent building to escape the blaze, a police official said. Those killed were identified as Ram Chandra Jha (65), the building's owner, Sudariya Devi (58), Sanju Jha (36), Guddan and Uday Chaudhary (33) and his wife Muskan (26), their children Anjali (10), Adarsh (7) and six-month-old Tulsi, the fire services official said.

No fire safety equipment was found in the building. Due to a cylinder blast on the second floor, a part of the building collapsed, an official said. The cause behind the fire is being investigated.

It is suspected that the fire started due to a short-circuit which led to the cylinder blast and the subsequent collapse of a wall of the building.  Ram Chandra Jha had rented out the ground floor to Vijay Singh Katara, who claimed that cloth worth Rs 20 lakh was gutted in the fire.