1st passenger train passing through Bogibeel bridge will be flagged off by PM on Tuesday, marking opening of longest rail-cum-road bridge. 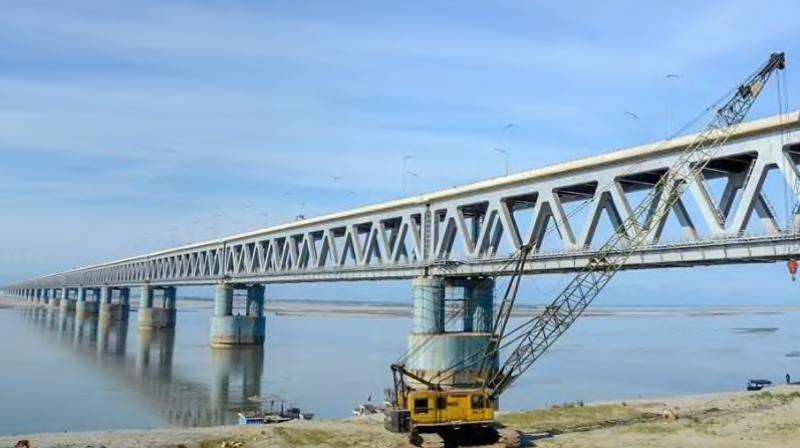 Bogibeel Bridge, India’s longest railroad bridge, connects the north and south banks of the Brahmaputra and falls in the eastern part of Assam and Arunachal Pradesh. (Photo: PTI)

Assam: The first passenger train passing through the Bogibeel bridge will be flagged off by Prime Minister Narendra Modi on Tuesday, marking the opening of the country’s longest rail-cum-road bridge.

The Tinsukia-Naharlagun Intercity Express will run five days a week. The 4.9-km bridge will cut down the train-travel time between Tinsukia in Assam to Naharlagun town of Arunachal Pradesh by more than 10 hours.

“It will take five-and-a-half hours compared to the 15-20 hours it currently takes. Passengers had to change trains multiple times and take a long-winded route,” Northeast Frontier Railway spokesperson Nripen Bhattacharya said. The 14-coach chair-car train will depart from Tinsukia in the afternoon. It will leave from Naharlagun the next morning, the spokesperson said.

The Bogibeel bridge connects the south bank of the Brahmaputra river in Assam’s Dibrugarh district with Silapathar in Dhemaji district, bordering Arunachal Pradesh.

The bridge and the train will be a boon for the people of Dhemaji as major hospitals, medical colleges and airport are in Dibrugarh, the third-largest city in the Northeast. It will also help the people of Itanagar as it is just over 15 km from Naharlagun, the spokesperson added.

Modi will flag off the train after inaugurating the Bogibeel bridge on December 25, the birth anniversary of late prime minister Atal Bihari Vajpayee and observed as the ‘Good Governance Day’ by the Centre.

The bridge is part of the infrastructure projects planned by India to improve logistics along the border in Arunachal Pradesh.