The LJP will also be given a Rajya Sabha berth and Paswan is likely to be its candidate. 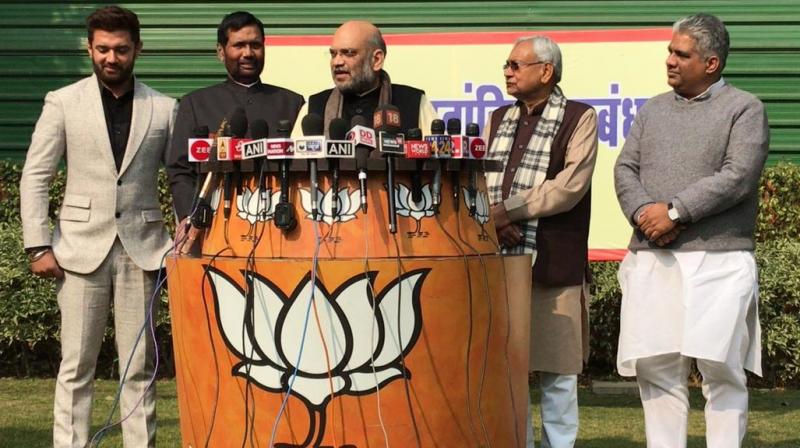 The announcement came after Amit Shah’s meeting with Nitish Kumar and Ram Vilas Paswan earlier in the day. (Photo: ANI)

New Delhi: After days of negotiations, BJP has finally worked out a seat-sharing formula with JD(U) and Lok Janshakti Party (LJP) in Bihar. The deal comes on expected lines with the BJP and Nitish Kumar’s Janata Dal (United) getting 17 seats each and Ram Vilas Paswan’s Lok Janashakti Party bagging 6.

Addressing the media in New Delhi, BJP chief Amit Shah announced that the party and JD(U) will contest 17 seats each while LJP will fight the elections on remaining six seats in the 2019 Lok Sabha elections in Bihar.

The LJP will also be given a Rajya Sabha berth and Paswan is likely to be its candidate.

Shah also said the alliance would contest the coming Lok Sabha polls under the leadership of Prime Minister Narendra Modi and added that there was no difference of any kind within the NDA in Bihar.

"All allies will soon decide on distribution of Lok Sabha constituencies among them for fielding their candidates in 2019," Shah added.

Amid talks of growing discontent among the NDA allies in Bihar, which further escalated following Upendra Kushwaha’s exit from the alliance, several meetings between Shah, senior BJP leader Arun Jaitley and LJP’s Chirag Paswan were held over the last few days.

Ram Vilas Paswan was reportedly miffed over Rajya Sabha seat he was promised by the BJP when the 50:50 seat-sharing formula was announced.

Recently, Chirag Paswan told the media that the BJP had digressed to 'non-issues' like the Ram temple and had demanded urgent steps to return to the 'real issue' of development. He also expressed unhappiness over seat sharing and warned the saffron party of “consequences” if seat sharing was not finalised.

However, after the announcement today, Ram Vilas Paswan claimed there was never a problem in the alliance as he has nurtured the "NDA tree" for five years under Modi's leadership. A government under Modi will be formed again, he said.

The Dalit leader also thanked Finance Minister Arun Jaitley, who played a role in brokering peace between his party and the BJP.

In his comments, the Bihar chief minister, who enjoys good equations with Paswan, said that the alliance is committed to development in Bihar and will work towards ensuring NDA’s win in 2019 Lok Sabha polls.

The deal suggests a victory of sorts for the LJP, which had adopted an aggressive stand seeking a better bargain from the BJP after the exit of Upendra Kushwaha-led RLSP from the ruling alliance.

Kumar too has managed to underline his importance for the saffron party, which will now contest on fewer number of seats than it had contested in 2014 and won 22 of them.