Rahul Gandhi concluded his address congratulating the BJP for winning polls and said Cong is set to play opposition in the next 5 years. 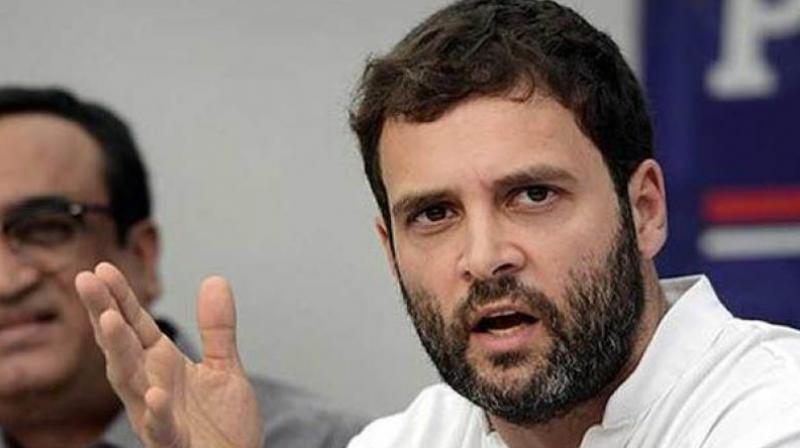 Hinting at Congress workers who did not contribute in the election campaign and worked against the party Rahul said that action will be taken against them. (Photo: PTI)

New Delhi: After being elected as the Congress president, Rahul Gandhi on Saturday met the party workers in Gujarat and congratulated them for giving a tough fight to the Bharatiya Janata Party in the recently concluded Assembly elections.

Rahul said he is confident that his party will form the next government in Gujarat which is the home-state of Prime Minister Narendra Modi.

He assured his party workers that the Congress party will win 135 out of 182 seats in the Gujarat Assembly elections in 2022.

Let me assure you, in the next Gujarat elections we will win 135 seats. In the meantime, you will not retreat. You will not give an inch. You will counter the BJP: Congress President Rahul Gandhi #ThankYouGujarat

Boosting the confidence of his party workers in Gujarat, Congress president Rahul Gandhi said the party can win elections in Gujarat.

If the Congress in Gujarat believes that it can win the elections, we will win. 70% of you believed this. We saw the results. You now know that Congress can win elections in Gujarat: Congress President Rahul Gandhi #ThankYouGujarat

Hinting at Congress workers who did not contribute in the election campaign and worked against the party Rahul said that action will be taken against them.

“90 per cent people fought together and made efforts with the Congress in the election but five to 10 per cent did not help the party and that action will be taken against them.”
Asking his party members to remain steadfast, Rahul said the Gujarat polls, despite the results, were a victory for the Congress because it used truth and love as a weapon to fight the polls.

"Agar Congress ek saath khadi ho jaati hai, to wo haarti nahin hai. Chunaav mein humari haar hui, par hum jeete kyunki wo gusse se lade aur unke paas sab saadhan the. aur humare paas sach; hum pyaar se lade" (If Congress stands together, it won't lose. In the elections (Gujarat polls), we lost. But it was our victory because they fought with anger and they had all the means. And we (only) had truth; we fought with love.), Rahul said.

The Congress chief added that his party lost the Gujarat elections because of the malicious campaign by BJP to defame the Congress party for the last 20 years.

“Let me tell you about the reasons for our defeat. In the last 20 years, the BJP and Mr Modi have run a campaign of defamation against Congress party workers and leaders,” Rahul said.

The Congress president, however, said that the perception about the party’s ability to win seats in Gujarat has changed following the results.“I want to congratulate all workers for a well-fought election. 3-4 months ago, people were questioning if the Congress could even contest elections in Gujarat.”

In the end, Congress leader Rahul Gandhi congratulated the BJP for winning the election and said his party is all set to play the role of opposition for the coming five years.

"They will work for Gujarat for next five years, and we will play the role of opposition," he concluded.