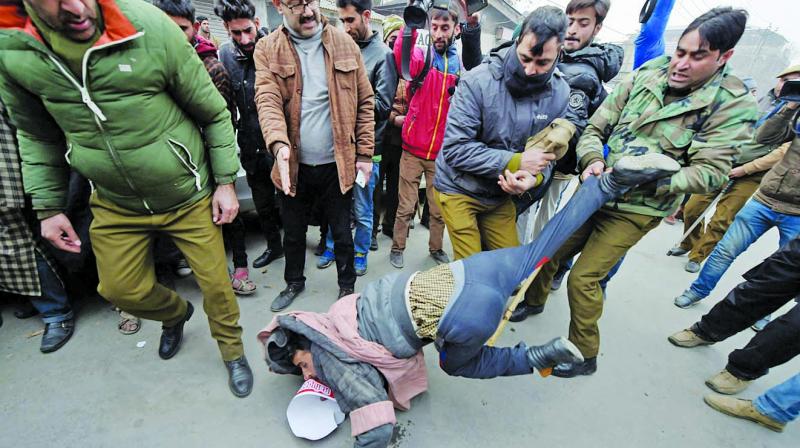 Policemen detain a protester in Srinagar on Thursday during a rally against the government’s decision to issue nativity certificates to West Pakistani refugees. (Photo: PTI)

Srinagar: The Jammu and Kashmir government’s recent decision to issue nativity and identity certificates to about 150,000 refugees from erstwhile West Pakistan is snowballing into a major controversy with separatists and mainstream Opposition National Conference (NC) accusing chief minister Mehbooba Mufti of implementing the RSS’s agenda in the state.

The move, they have alleged, is aimed at changing the Muslim-majority character of Jammu and Kashmir. Both the separatists and the NC and some other likeminded parties and civil society groups also maintain that issuing ‘domicile’ certificates to the refugees goes against the state subject law in force here since 1927.

The separatists have, while terming it a part of the RSS agenda, called for holding protests on Friday and threatened to go beyond it unless the government withdraws the decision. The Pakistan government too has stepped in, accusing India of settling non-Kashmiris in the state in an attempt to change its demographic composition.

Pakistan’s foreign office spokesman Nafees Zakaria said at his weekly press briefing in Islamabad, “Reportedly, the PDP-BJP regime, in violation of UNSC resolutions, has started issuing domicile certificates to non-Kashmiri Hindus in Jammu. The move is part of the regime’s nefarious designs to change the demographic composition of the territory.” He added, “This act of bringing material change in the disputed territory of J&K is a blatant violation of the UNSC resolutions on Kashmir. Kashmiris hope that the international community and relevant international organisations will call India to the account.”

But the J&K authorities have clarified that no domicile but only ‘nativity/identity certificates’ are being issued to the refugees to help them in seeking employment in the Central government departments and also avail various welfare schemes sponsored by it and that the document will not entitle a person to buy immovable property in J&K, which only a permanent resident can do.

Nevertheless, observers say the move could be seized by the separatists and the Opposition to create a difficult situation for the PDP-BJP, which has just come out of a worst crisis triggered by the killing of militant commander Burhan Wani. Also, peace that returned  after witnessing a five-month turbulence could become a casualty again.

J&K’s education minister and government spokes-person, Naeem Akhtar, has not ruled out such possibility. “It is a deliberate attempt to destabilise the situation and hit the political and economic interests of the people,” he said.

Paradoxically, some BJP leaders in Jammu have quickly tried to gain some political mileage by publicly boasting that issuing ‘nativity/identity certificates’ to the refugees is a prelude to make them permanent resident of the state. But while doing that they have only helped the government’s detractors in spreading the notion that the move is aimed at changing the demographics of the state. In 1947-48, as many 5,764 families moved in Jammu and Kashmir after leaving their homes and hearth in erstwhile West Pakistan. They chose mainly the areas falling in close proximity to the border with Pakistan from Kathua to Akhnor in Jammu region as their new home but only to face numerous problems in absence of domicile tag. Today, their population has risen to 1.5lakh (19,960 families).

They have been asking for domicile right and a special package for rehabilitation in the state, besides a host of other benefits and also the right to vote and contest state Assembly elections, allotment of land, special recruitment, right to education in technical/professional institutions and, with half of them being dalits, issuance of SC/OBC certificates. At present, these refugees are citizens of India and do have the right to vote in Lok Sabha elections. However, they do not enjoy voting rights to the state Assembly and local bodies. The government has confirmed that the refugees are being issued ‘nativity/identity certificates’ after receiving directions from Union home ministry in August. These certificates, officials said, clearly mention that the person is a West Pakistan refugee, who has been living in J&K after the Partition but is not a resident of the state.

Labha Ram Gandhi, leader of West Pakistan Refugees Action Comm-ittee, termed the ‘nativity/identity certificates “only little helpful”. “A false and contrived impression is being created regarding the change of status of the West Pakistan Refugees (WPR),” said Mr Akhtar. He added, “A misleading campaign is launched to create an impression that the government is changing the status of the WPR and that they are being provided domicile certificates.”

“These refugees can’t apply for any job within the State, because of being non-state subjects and in order to facilitate them to get jobs in paramilitary forces and other Central government establishments, the government has issued them Identity Certificates which is in the same format as exists in the voter list for the Parliamentary polls, he said.

Mr. Akhtar added, “Issuance of Identity Certificates does in no way change the status of the West Pakistan refugees and they continue to be the non-state subjects. But unfortunately, earlier this year also controversies were stirred and public passions raised deliberately on tenuous issues like Pandit colonies and ex-servicemen colonies which ended up with a long spell of disorder and violence in Kashmir resulting in loss of so many precious lives, injuries, destruction of public and private properties, breakdown of academic system, torching of schools, ruining of economy and complete halting of developmental process”.

He said that now when the situation has started improving in Kashmir with academic, tourism, developmental and economic activities slowly picking up again, speculative reports are being passed around about the change of status of the West Pakistan r to create confusion and once again fuel disquiet. He urged the people not to give credence to such “unsubstantiated and disingenuous” reports.

Meanwhile, Independent MLA and leader of regional Awami Itehad Party (AIP) Sheikh Abdur Rasheed and his supporters were on Thursday detained as they tried to march along the streets of Srinagar in protest against the government move. Talking to reporters before being detained, Mr. Rasheed said the government decision to grant domicile certificates to West Pakistan refugees was “totally unacceptable to us”. He alleged that Mehbooba Mufti –led government was behaving as a “proxy” and “extension” of the BJP government in Delhi. He said, “Time has come for Chief Minister Mehbooba Mufti to break this alliance (with BJP) and go to people once again (to seek votes).”

The AIP said that, at least, eight of its workers were injured in the scuffle and while being dragged from the scene by police. Later, Mr. Rasheed said, “Despite the fact that the issue is a desperate attack to change the Muslim character of the State, the decision would affect the rights of Dogras in Jammu region as well”. He announced to begin a 48-hour sit-in outside the Chief Minister’s Srinagar residence on Friday “to remind her that she can’t run away by justifying every shameless disastrous act’.

In the evening after being released from a Kothi Bagh police station here, he was re-arrested by the police as he confronted a group of VHP’s national leaders and activists currently on a visit of the Valley at Mushtaq Press Enclave here. As the two sides came face-to-face, Mr. Rasheed accused the VHP of meddling in Kashmir. “You are killers of Kashmiris and there is no place for you here,” he shouted at them. The AIP in a statement termed it as a “surprise and swift move” and said that about two dozen activists led by Mr. Rasheed took the VHP national leaders “hostage” for about half an hour when they were addressing media. “Those who demolished Babri Masjid, massacred Muslims in India, want to change demography of Jammu and Kashmir and make India a Hindu Rashtra have no place in Kashmir,” he was quoted as saying.