Every passenger arriving from Delhi-NCR, states of Goa, Rajasthan and Gujarat will have to mandatorily carry a Covid-19 negative report 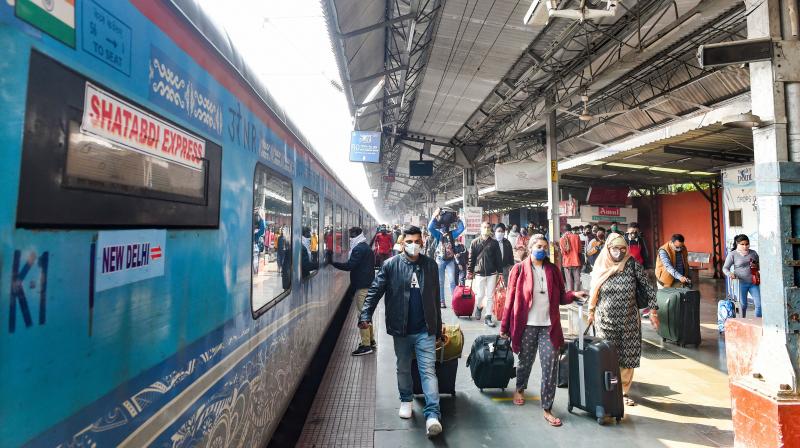 Passengers on their arrival from New Delhi by Shatabdi Express, at Charbagh railway station in Lucknow, Monday, Nov. 23, 2020. (PTI)

Mumbai: The Maharashtra government on Monday made it mandatory for all travellers coming to the state from Delhi, Rajasthan, Gujarat and Goa to carry RT-PCR negative reports. Fearing second wave of Covid-19 in Maharashtra, the state government issued new Standard Operating Procedures (SOPs) which states that every passenger arriving from Delhi-NCR, states of Goa, Rajasthan and Gujarat will have to mandatorily carry a Covid-19 negative report while travelling with either rail, road or train.

For domestic air travellers, the RT-PCR sample collection should have been done within 72 hours before the scheduled time of landing at airports in Maharashtra. Passengers not having the RT-PCR test reports will have to compulsorily undergo RT-PCR tests at concerned airports at their own costs.

“The Airports Authority of India is requested to check for the report before allowing the passengers to board the flight. Only after taking the test, the passengers will be allowed to go home by the Airport Operator,” the government notification said.

Passengers arriving in the state via rail will have to carry an RT-PCR negative test report from a sample collected 96 hours before the scheduled arrival in the state. Those rail passengers who do not have an RT-PCR test negative report will be screened for symptoms including body temperature at the alighting railway stations.

“Passengers not having the RT-PCR test negative report shall be screened for symptoms and body temperatures at the alighting railway stations. Passengers without symptoms would be allowed to go home,” the notification said.

Railway passengers showing symptoms shall be segregated and made to undergo antigen test. Passengers whose antigen test report will be negative will be allowed to go home, the government said. It said that passengers not testing/found COVID-19 positive, shall be sent to COVID-19 care centres and the cost shall be borne by the commuters themselves.

Similarly, for those travelling by road, the state government added that the concerned district collectors of state's border districts shall make arrangements to ensure that the passengers coming from these four states shall be tested for symptoms including body temperature. Those with symptoms will have to undergo an antigen test and will be allowed entry in the state only if the report is negative. People with Covid-19 symptoms seeking to enter the state from Delhi, Rajasthan, Gujarat and Goa would be turned back, the notification said.

The new guidelines were issued a day after chief minister Uddhav Thackeray warned people of the “tsunami” of Covid-19 cases in the state if precautions are not taken. He urged the people of the state not to lower their guard against COVID-19 and follow the safety protocols strictly so that there will be no need to impose another lockdown.

Maharashtra's COVID-19 tally rose to 17,84,361 with the addition of 4,153 new cases on Monday, the state health department said. With 30 fresh deaths reported during the day, the state's fatality count increased to 46,653.