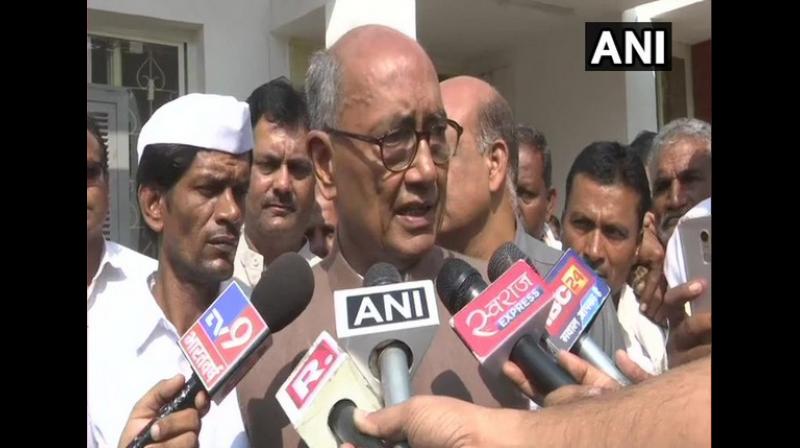 'This is making a mockery of the constitution. BJP did the same in Goa, Meghalaya and other states. No MLA of the NCP will support this, Ajit Pawar has gone along with them,' Singh said. (Photo: ANI)

New Delhi: Hitting out at NCP leader Ajit Pawar and BJP for joining hands to form government in Maharashtra, senior Congress leader Digvijaya Singh on Saturday claimed that no NCP MLA will support such a political move as Pawar did.

"This is making a mockery of the constitution. BJP did the same in Goa, Meghalaya and other states. No MLA of the NCP will support this, Ajit Pawar has gone along with them," Singh said while speaking to media after BJP leader Devendra Fadnavis took oath as chief minister and Pawar as deputy chief minister of Maharashtra.

In a series of tweets, Singh has questioned the sudden political development on Maharashtra and said: "Shiv Sena NCP and Congress should show their strength on the ground and take to the streets. Let's see with whom are the people of Mumbai and Maharashtra? For the three parties, it is a question of survival. This is a question of prestige, especially for the Uddhav and Thackeray's family."

"I had to withdraw my earlier tweet about Notification of withdrawal of President's rule as I am told GOI issued Notification at 5.30 am today. But still, Governor has certainly violated the Constitution. Not the first time. Goa Manipur Meghalaya and now Maharashtra," he tweeted.

Fadnavis and Ajit Pawar were administered the oath by Governor Bhagat Singh Koshyari. The move came at a time when deliberations between Congress, NCP and Shiv Sena seemingly reached the final stage on Friday.

The Governor had then invited NCP, the third-largest party, to prove its ability to form the government failing which President's Rule was imposed in the state.
The BJP won 105 seats in the 288-member assembly followed by Shiv Sena 56, NCP 54 and Congress 44.