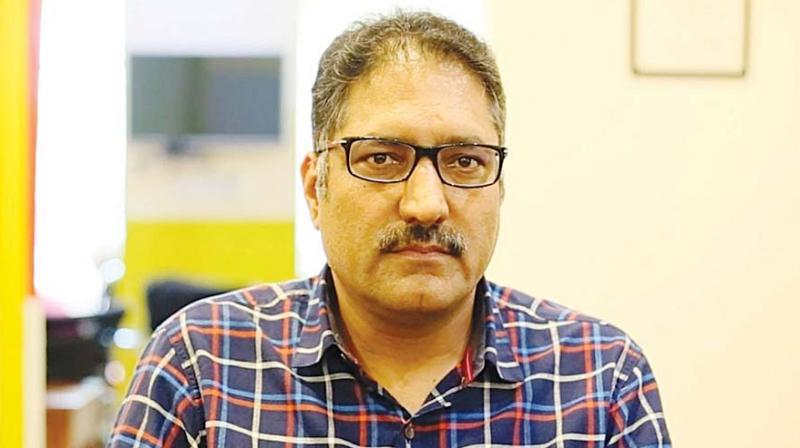 Veteran journalist and editor of ‘Rising Kashmir’ Shujaat Bukhari was killed outside his office in Srinagar’s Mushtaq Press Enclave on June 14. (Photo: File)

Srinagar: A top commander of outlawed Lashkar-e-Tayyaba (LeT) allegedly involved in the murder of ‘Rising Kashmir’ editor Shujaat Bukhari is among six militants killed on Friday in a fierce gunfight with security forces in Anantnag district of restive Jammu and Kashmir, the officials said.

Srinagar-based defence spokesman Colonel Rajesh Kalia said that the exchange of fire between security forces and militants began in the early hours in Shalgund village of Bijbehara area of the district.

“Six terrorists eliminated in the encounter and arms and ammunition were recovered from the spot”, he said.

The police officials identified one of the slain militants as top LeT commander Azad Ahmed Malik. They claimed that Malik was among the militants who killed veteran journalist and editor of ‘Rising Kashmir’ Shujaat Bukhari outside his office in Srinagar’s Mushtaq Press Enclave on June 14.

J&K police had on June 28, two weeks after Bukhari was murdered, claimed that the conspiracy to kill him was hatched by LeT militants based in Pakistan and executed by its three cadres including two locals and a Pakistani national in Srinagar.

Inspector General of Police (Kashmir range) SP Pani had told the media that before targeting Bukhari, a “malicious” campaign was spearheaded against him by the LeT through social media from the neighbouring country.

He had also said that among the conspirators was Sheikh Sajjad Gul, a resident of Srinagar’s Zainakote area, who is now based in Pakistan and that the crime was executed by LeT operatives Azad Ahmed Malik alias Dada alias Zaid, Muzaffar Ahmed Bhat and Muhammad Naveed Jutt alias Abu Hanzalla.

Malik who was killed on Friday was a resident of Arwani village of Bijbehara and, as per police statement, had been active as LeT militant since December 2016 whereas Muzafar Ahmad Bhat alias Talha is from Sopat village of Qazigund area in neighbouring Kulgam district.

Naveed Jutt, the third alleged executioner, is a Pakistani national from Sahiwal (Multan). He had on February 6 this year escaped after killing two J&K policemen who were escorting him to a hospital in Srinagar for medical check-up from a City prison and is since known to be active mainly in south Kashmir.  He had been arrested by the Army from Kulgam in June 2014 and was lodged in Srinagar’s high security central prison.

The police had constituted a Special Police Investigation Team (SIT) under Deputy Inspector General of Police (Central Kashmir) VK Virdhi to probe the gruesome murder of Bukhari. But it has, so far, not been able to file chargesheet against the accused in the court.

The LeT had strongly denied its involvement in the journalist’s killing and in its counter charge blamed Indian intelligence agencies.

The others killed with Malik on Friday were Basit Mir, Anees Ahmed, Aqib, Shahid and Firdaus Ahmed- all local Kashmiris.

A senior Army commander termed the killing of the militants as a “successful surgical operation”.

Lt. Gen AK Bhatt, the General-Officer-Commanding of Srinagar based 15 Army Corps told reporters in north-western town of Baramulla, “It was a prompt, precise successful operation and the security forces didn’t suffer any damage in it”.

Giving the details of the operation, a police spokesman said that a joint party of the Army's 3 Rashtriya Rifles, the counter insurgency Special Operations Group (SOG) of the J&K police and Central Reserve Police Force (CRPF) launched a pre-dawn cordon-and-search operation in Shalgund-Satkipora in Dachnipora forest belt of Bijbehara following credible input about the presence of militants.

“As the operation was going on, the search party was fired upon by the militants. The fire was retaliated leading to a gunfight,” he said adding that in the fire fight six militants were killed whose corpses were retrieved from the site of encounter.

The police also said that incriminating materials including huge quantity of arms and ammunition were recovered from the site of encounter.

Meanwhile, the security forces are reported to have launched another cordon-and-search operation at Gulab Bagh of Tral area in neighbouring Pulwama district following “specific inputs” about the presence of militants in the village.

“A girl in the adjoining area got injured in the indiscriminate firing by the terrorists. Alert soldiers retaliated immediately and the Quick Reaction Team was launched in the direction from which the firing had come. The terrorists however managed to escape taking advantage of the terrain and weather conditions,” the spokesman said.