India   All India  23 Nov 2017  BJP ministers a ‘bunch of sycophants’, most unknown to people: Shatrughan Sinha
India, All India

BJP ministers a ‘bunch of sycophants’, most unknown to people: Shatrughan Sinha

Sinha also took a swipe at those criticising him for speaking on economic decisions of govt like demonetisation and the GST. 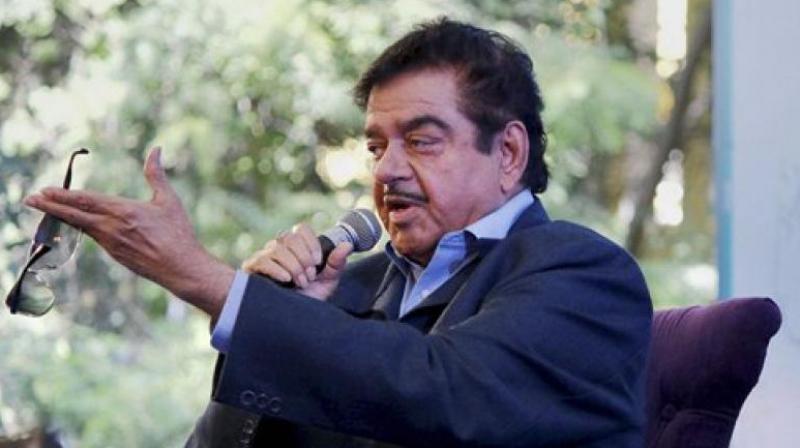 Sinha also targeted Modi as he bared his 'dil ki baat' at an event, saying: 'Somebody else has patented 'mann ki baat'. (Photo: PTI File)

New Delhi: In his first direct attack on Prime Minister Narendra Modi and BJP chief Amit Shah, party MP Shatrughan Sinha on Thursday described the dispensations running the government and the organisation as a "one-man army" and a "two-man show".

The outspoken Lok Sabha member from Patna Sahib, in a no-holds-barred assault on the Modi government, said its ministers were a "bunch of sycophants" 90 per cent of whom were hardly known to people.

Sinha also targeted Modi as he bared his 'dil ki baat' at an event, saying: "Somebody else has patented 'mann ki baat'.

The atmosphere nowadays is such that either you support a person or be ready to be called anti-national". Sinha, though often critical of the government's policies, was on Thursday unusually forthright in attacking it from the dais he shared with several top opposition leaders including CPI-M general secretary Sitaram Yechury and rebel JD(U) MP Sharad Yadav. The occasion was the release of a book on another rebel JD(U) MP Ali Anwar.

"The dictum guiding the current times is 'na jioonga na jeene doonga' (neither will I live, nor allow others to live)," he said in an apparent parody of Modi's anti-graft slogan 'na khaoonga, na khane doonga' (won't take bribe, will not let others).

Sinha rubbished the claim by his detractors that he was upset over not being made a minister, saying he never had any such expectations.

Mocking the Modi government's ministers, he said, "Nobody knows 90 per cent of them. They won't be recognised in a crowd... They are a bunch of sycophants. They are not there to create anything but are just trying to survive."

He once again took a swipe at those criticising him for speaking on economic decisions of the government like demonetisation and the GST.

"If a lawyer can become finance minister, a TV actress can become HRD minister and a tea-seller..., then why cannot I speak on these issues," he said, apparently targeting Finance Minister Arun Jaitley, Information and Broadcasting Minister Smriti Irani, who earlier held the HRD portfolio, and the prime minister.

"Intellectuals are being killed and now even judges are being killed," he alleged, claiming that these issues were not getting adequate attention in the media as 'dhantantra' (money power) was getting the better of 'jantantra' (people's power).