This, intelligence agencies, feel will spread more radicalisation among the local population in the Valley, particularly the youth. 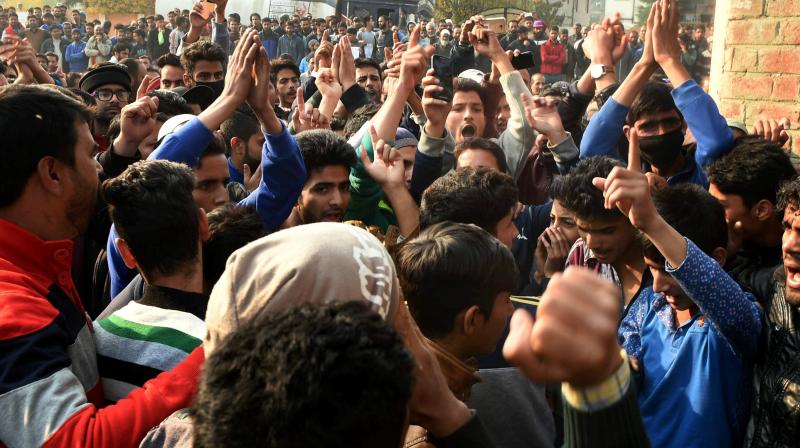 Youth shouting slogans outside the residence of hardline Hurriyat Conference chairman Syed Ali Shah Geelani as he along with moderate Hurriyat chairman Mirwaiz Umar Farooq and JKLF chairman Mohammad Yasin Malik held a seven-hour long marathon meeting with the ‘stakeholders’ on future course of the agitation in the valley, in Srinagar. (Photo: PTI)

New Delhi: Even as normalcy returns to the Kashmir Valley after a gap of almost four months, separatists and some Hurriyat leaders are reportedly preparing for another round of agitation in the days ahead. Intelligence reports received by the Union home ministry reveals that only this time the separatist elements are trying to rope in religious leaders and head of religious institutions, like imams and local mosque committees to “incite poor people and relatives of those civilians who were either killed or injured during the recent protests.”

The Kashmir Valley witnessed unprecedented violence by agitating stone-pelters following the killing of Hizbul Mujahideen commander Burhan Wani by security forces in July. All major government and commercial establishments, including educational institutions, also remained closed and have started functioning again only a couple of days ago.

Thus separatists and some Hurriyat leaders are once again trying to revive the agitation with the help of local religious leaders. This, intelligence agencies, feel will spread more radicalisation among the local population in the Valley, particularly the youth.

Taking note of these recent inputs, the home ministry has directed security agencies to closely monitor the situation, particularly about the new evolving nexus between separatist and religious leaders. Security forces, including the state police, has been asked that, if required, “such elements” should be taken into preventive custody.

“We were always sceptical that radical elements would join hands with the separatists and these recent inputs only confirm that. The security agencies have already been cautioned and they are keeping a close watch to ensure that during religious sermons the leaders do not instigate the local population,” a senior security official said.

In the past few months in the Valley, security agencies have arrested 280 Hurriyat leaders, including 78 who were detained under the Jammu and Kashmir Public Safety Act. Intelligence sources said more such arrests and detention in the days cannot be ruled out.

Taking serious not of a bank robbery in Budgam on Monday, the home ministry has also asked security agencies to ensure that adequate protection is given to all banks, ATMs and vehicles carrying cash in the Valley. Following demonetisation of `500 and `1,000 currency notes militants are said to be facing a major cash crunch for their operations and could target more banks in the coming days.

Sources said the Ministry was in constant touch with senior police officials including the State Director General of Police. The hawala network which was the biggest source of funding for terror activities has also been badly hit by the demonetisation move with reports reaching Home Ministry suggesting that the hawala trade was down by almost 80 per cent.