The two have been identified as Ashfaq Shaikh and Moinuddin Pathan. This has taken total number of people arrested in case to six. 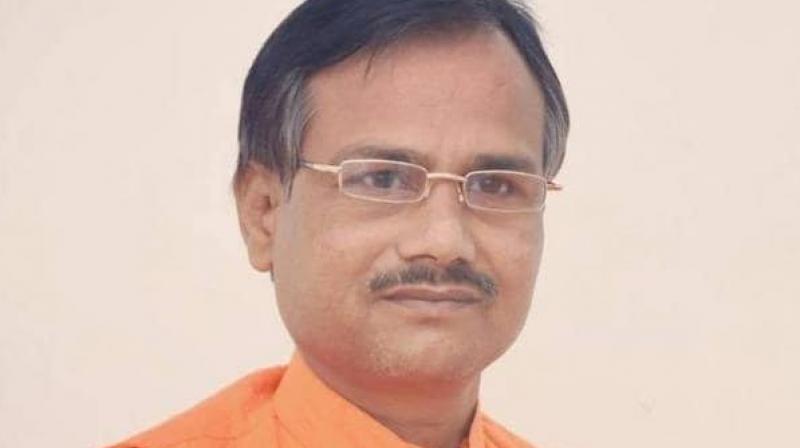 Tiwari (45), who headed HSP, was killed at his home in Naka Hindola area in Lucknow on October 18. He was earlier associated with a faction of the Hindu Mahasabha. (Photo: File)

New Delhi: In a major breakthrough in murder of Hindu outfit leader Kamlesh Tiwari, two men allegedly involved were arrested by Gujarat’s Anti Terrorism Squad from the Rajasthan border. The two have been identified as Ashfaq Shaikh and Moinuddin Pathan. This has taken the total number of people arrested in the case to six.

According to police, the two men, who were absconding after murdering Tiwari in Lucknow on October 18, were nabbed when they were on way to their families as they had run out of cash, reported News18.

The duo will be handed over to the Uttar Pradesh police probing the killing of Tiwari, who headed a little known outfit, Hindu Samaj Party (HSP).

"After committing the crime, the duo went to Nepal and then started their journey back to Gujarat after reaching Shahjahanpur (in Uttar Pradesh). Since they ran out of cash, the accused duo contacted their family members and acquaintances for more money. Based on technical and physical surveillance, they were eventually traced today evening," the police statement read.

Tiwari (45), who headed HSP, was killed at his home in Naka Hindola area in Lucknow on October 18. He was earlier associated with a faction of the Hindu Mahasabha.

On Friday, in a joint operation, the UP police and Gujarat ATS had arrested three suspects in the case from Surat - Maulana Mohsin Shaikh, Faizan and Rashid Pathan. Meanwhile, a team of the Uttar Pradesh police landed in Surat on Tuesday to conduct further probe into the killing of Tiwari.

The Surat link came to light after the UP police found a box of sweets, bearing the logo of Dharti Sweets located in the Udhna area of the diamond city, from Tiwari's house, where he was gunned down by assailants.

Sources in the Surat police revealed a team of the UP police landed in the south Gujarat city and visited the sweet shop to get some more clues from CCTV footage, reported NDTV. The UP team also visited Limbayat and Navsari Bazar areas to question people who know the accused arrested from Surat, the sources said.

On Sunday, the police said it had recovered a bloodstained knife allegedly used to kill Tiwari from a hotel room where the duo had stayed in Lucknow.

The police had said the conspiracy to kill Tiwari was hatched in Surat as the suspects were upset with the derogatory remarks made by him against Prophet Mohammad in 2015.