Shivanand Tiwary, RJD's national VP, announced on social media that he was taking a holiday from the role he had been playing in the party. 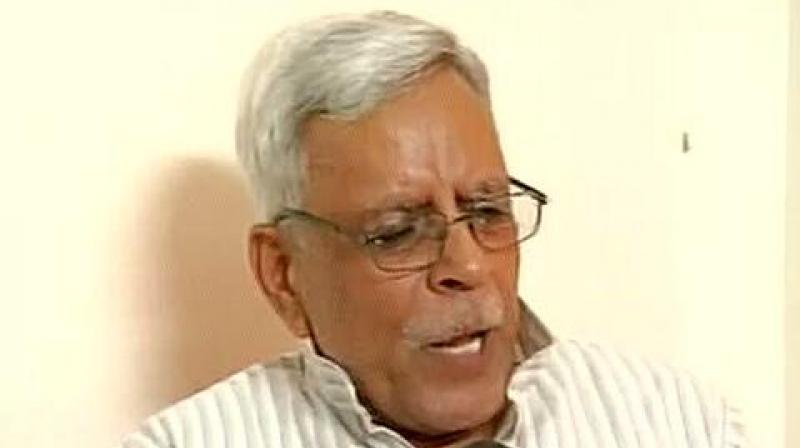 "Feeling tired. The fatigue is more of the mind than the body. Want to write a memoir but unable to do even that..Hence taking a holiday from whatever role I had been playing in the RJD", the 76-year-old Tiwary said in a message he shared on social media. (Photo: File)

Patna: In yet another indication that all was not well within Lalu Prasad’s Rashtriya Janata Dal, a top leader of the main opposition party in Bihar on Tuesday announced that he was going on a sabbatical, citing "mental fatigue".

Shivanand Tiwary, the RJD's national vice president, announced on the social media that he was taking a holiday from the role he had been playing in the party.

"Feeling tired. The fatigue is more of the mind than the body. Want to write a memoir but unable to do even that..Hence taking a holiday from whatever role I had been playing in the RJD", the 76-year-old Tiwary said in a message he shared on social media.

However, when probed further, Tiwary who has known Prasad since the days when the latter was a student leader- told PTI. "I have not said anywhere in my message that I am resigning from the primary membership of RJD or even from the post I hold therein. It would not be correct to draw too many interpretations".

The development comes at a time when the RJD, which has the largest number of MLAs in the current state assembly, appears to be crumbling under the weight of adverse circumstances, most notably the absence of its founding president who is in Ranchi serving sentences in fodder scam cases.

Prasad’s family, which controls the party in his absence, seems engaged in a bitter feud which has left the RJD rudderless.

The 22-year-old party put up its worst ever performance in the Lok Sabha polls this year when it contested half of the total number of 40 seats in the state but ended up drawing a blank.

Although Prasad had, while out of jail, sought to make the line of succession clear with the passing of a unanimous resolution that his younger son Tejashwi Yadav would be the RJDs Chief Ministerial candidate in 2020 assembly polls, the 29-year-old seems to be tottering in the face of his elder siblings Tej Pratap Yadav and Misa Bharti appearing unwilling to accept his political authority.

Rabri Devi, who had started off shortly after formation of the party as a demure housewife taking the political plunge at the instance of her husband, appears unequal to the task of keeping the RJD afloat with her husband behind bars, her three children active in politics at each others throats and her elder son engaged in a nasty marital dispute.

Notably, Tiwary was also part of the old guard in the RJD, which had expressed the opinion in the wake of the partys debacle in general elections that Chief Minister Nitish Kumar be wooed back into the Grand Alliance given his own discomfort within the BJP-led NDA.

Tiwary had also been associated with the JD(U) headed by Kumar, having represented the party in the Rajya Sabha until his expulsion from the party after the 2014 general elections when he fell out with the Chief Minister.

The idea about Kumar expressed by Tiwary as well as more loyal party veterans like Raghuvansh Prasad Singh has, however, been rubbished by Tejashwi Yadav, who holds the reins of the party despite spending most of his time away from Bihar and its political hustle and bustle.