The senior Sangh functionary also wrote a blog in which he raised questions about the award, terming it “political” in nature. 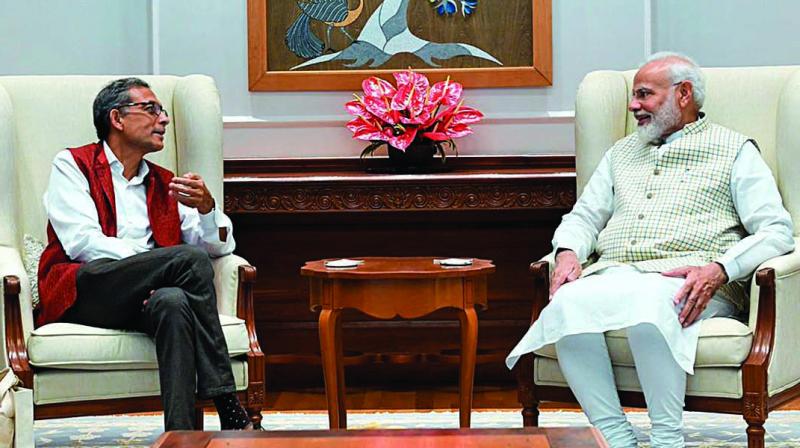 New Delhi: Nobel laureate Abhijit Banerjee on Tuesday called on Prime Minister Narendra Modi and the two had a “healthy and extensive” interaction on various subjects. Mr Banerjee, an India-born American professor at Massachusetts Institute of Technology (MIT), has won Nobel in economics with Esther Duflo and Michael Kremer for “experimental approach to alleviating global poverty.”

“Excellent meeting with Nobel Laureate Abhijit Banerjee. His passion towards human empowerment is clearly visible. We had a healthy and extensive interaction on various subjects. India is proud of his accomplishments. Wishing him the very best for his future endeavours,” PM Modi said in a tweet, sharing a picture of their meeting at his official residence.

Mr Banerjee, speaking to the media after his meeting with Prime Minister Modi on Tuesday, said he would not get into controversial statements because he had been warned, by the Prime Minister.

“I had a cordial and good meeting. PM Modi started by cracking a joke on how media is trying to trap me to say anti-Modi things... He’s been watching the TV and he’s been watching you guys. And he knows what you are trying to do,” Mr Banerjee remarked.

However, the economist came in for severe criticism from the Rashtriya Swayamsevak Sangh (RSS) affiliate Bharatiya Shikashan Mandal (BSM), which termed the Nobel as “political” and his work as “theory” that lacked practical application.

The national organising secretary of BSM, Mukul Kanitkar, while speaking to this newspaper, said that Mr Banerjee had till now not been able to practically implement his ideas as they are just theories. The senior Sangh functionary also wrote a blog in which he raised questions about the award, terming it “political” in nature.”Policies that Mr Banerjee is advocating have already failed. Yet, it is being advocated and being authenticated by conferring Nobel Prize. This is very dangerous. Why the US did away with Obamacare, because it was pressuring the economy. Greek economy also collapsed as it preferred doling out food tickets rather than encouraging people to work,” said Mr Kanitkar.His detailed comments were also posted on the blog Uttarapath, titled Nobel ki Raajneeti ya Arthashastra ka Bhram, just hours after the Prime Minister met the Nobel laureate. Mr Kanitkar alleged that Mr Banerjee was the right candidate to be used as part of an international conspiracy.

“The ideological background of Banerjee makes him ideal case to be picked up for an international conspiracy. Education in South Point Kolkata, higher education in JNU, research in MIT. He left his Indian wife to marry a foreign student, all of this is a shortcut to become an intellectual aligned with the prevailing ecosystem. The country is already burdened with award winners like Amartya Sen, Arundhati Roy, Ravish Kumar and that’s why this suspicion,” stated Mr Kanitkar in his blog post. Taking a dig at Mr Banerjee and the Congress in the same breadth, Mr Kanitkar suggested that the Congress should try and implement his “Nyay” scheme in one of the big Congress-ruled states. The concept of Nyay, a welfare scheme promising cash amount for all, floated by the Congress ahead of the 2019 Lok Sabha polls, also came under fire as Mr Kanitkar hoped that Congress governments in states of Rajasthan, Madhya Pradesh and Punjab would implement it.

“However, Indian origin Banerjee should be congratulated for the prize. I hope the imaginative jugad called Nyay is brought in... There are states like Punjab, Madhya Pradesh and Rajasthan where Congress is in power. If they believe in Mr Banerjee’s politics, they should implement it,” added Mr Kanitkar.Bharatiya Shikshan Mandal is an RSS affiliate body which says that it is “working with the objective of national resurgence in the field of education”.