The militants barged into a house in Seer area of Tral and opened fire on the duo, read a statement issued by the police. 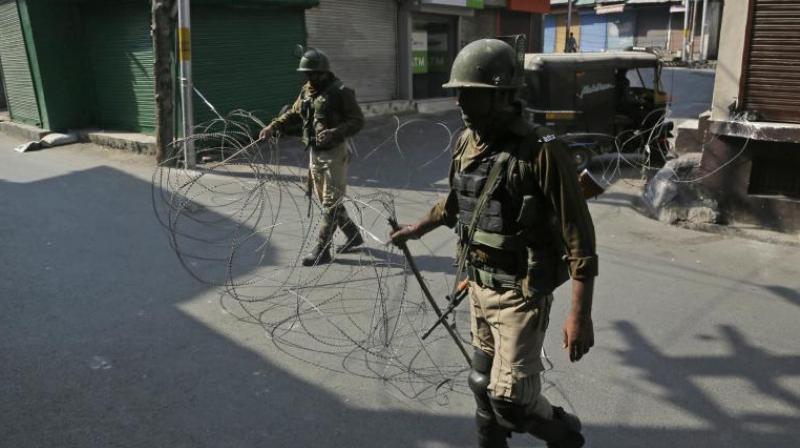 Indian paramilitary soldiers closes a street with a barbwire during a strike called by separatists and restrictions imposed by authorities as a precautionary measure in Srinagar. (Photo: AP)

Srinagar: A teenage girl was killed and a woman wounded when suspected militants attacked them in Seer village of Tral area of Jammu and Kashmir’s southern Pulwama district.

The area earlier also witnessed a series of attacks on the houses of the local leaders of ruling Peoples’ Democratic Party (PDP) and Opposition National Conference (NC) and a police official.

The police blamed these attacks on separatist militants. The officials said that the gunmen opened fire at Yasmeena, a resident of Tral’s Khonmoh village, and Ruby, who lives at Seer. While the former died on the spot, the latter was rushed to Tral’s sub-district hospital.

From there, she has been shifted to Srinagar for specialised treatment.

The militants barged into a house in Seer area of Tral and opened fire on the duo, read a statement issued by the police.

“Among them, 18-year-old girl identified as Yasmeena daughter of Ghulam Rasool Bhat, a resident of the Khonmoh area was killed instantly while Rubeena, the wife of Mohammad Shafi Wagay and resident of Seer Jagir Tral was left injured”, it said.

The statement also said that a search operation was launched in the area immediately after the incident to take on the assailants.

Later during the day, suspected militants hurled a hand grenade at the house of NC leader Muhammad Ashraf Bhat in the heart of Tral town, injuring a CRPF jawan on guard duty.