India   All India  23 Sep 2020  COVID cases in India decline for fifth day in a row
India, All India

On Tuesday, a substantial decline in new cases was noted in Maharashtra, Andhra Pradesh, Tamil Nadu and Delhi 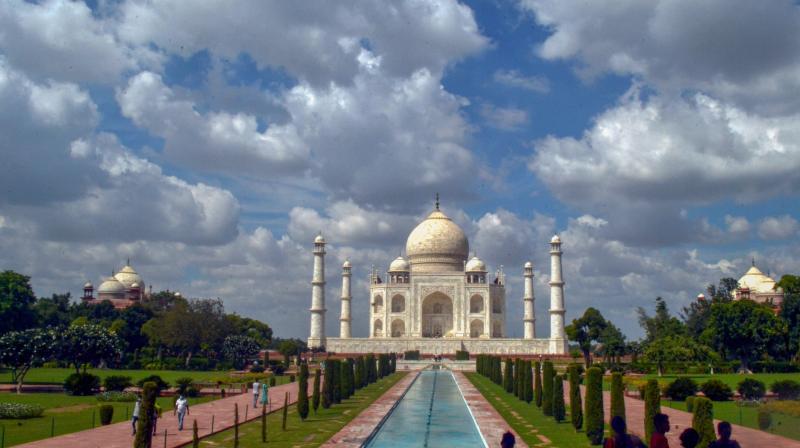 Visitors at Taj Mahal after it re-opened yesterday for public following being shut for over six months, amid the coronavirus pandemic, in Agra. — PTI photo

A major decline in fresh cases of novel coronavirus was recorded in the last 24 hours as newly detected cases came down to 75, 083. This is the fifth consecutive day when cases are found to be reducing from 97, 894 on September 17. Union Health Secretary Mr Rajesh Bhushan said that the decline in fresh cases has nothing to do with lesser testings. This coincided with over 1 lakh recoveries in one day for the first time taking the country's Recovery Rate to 80.86 per cent. The total number of recovered patients is almost 45 lakh while India’s case fatality rate is 1.60 per cent.

“On September 19 we had conducted 8.81 lakh tests and detected 93, 337 cases. On September 20 we conducted over 12 lakh tests and found 92,605 cases, on September 21 we tested 7.31 lakh people and got 86, 961 positive while on September 22 we tested 9.33 lakh samples and found 75, 083 positive. So testing is not less and the number of positive cases are not determined by tests. We are monitoring this data on a daily, weekly and monthly basis to keep a track of the trend of COVID-19,” Mr Bhushan said.

On Tuesday, a substantial decline in new cases was noted in Maharashtra, Andhra Pradesh, Tamil Nadu and Delhi. Prime Minister Narendra Modi will chair a meeting with chief ministers and health ministers of seven high-burden states -- Maharashtra, Andhra Pradesh, Karnataka, Uttar Pradesh, Tamil Nadu, Delhi and Punjab -- on Wednesday to review the COVID-19 situation from where 63 per cent of the total active cases, 65.5 per cent of all cases and 77 per cent of the total deaths in the country are concentrated.

“Along with the other five states, Punjab and Delhi have reported an increase in the number of cases being reported recently. Maharashtra, Punjab and Delhi are reporting high mortality with more than 2% Case Fatality Rate (CFR). Other than Punjab and Uttar Pradesh, their positivity rate is observed to be above the national average of 8.52 per cent," a statement from PM office said.

There are close to 9.76 active cases of COVID19 in the country which make 17.54 per cent of the total case load. As per union health ministry data, India’s total COVID-19 infections so far reached 55.63 lakh while overall death figures reached close to 89,000 with 1,053 new deaths. However, according to COVID19India.org, the total cases were close to 56 lakh by Tuesday evening.

Meanwhile, NITI Aayog member Mr V.K. Paul that the makers of Russian Covid19 vaccine Sputnik V have been asked to file an application for stage 3 clinical trials in India through an Indian representative even though ICMR chief Dr Balram Bhargava said the efficacy of respiratory vaccines is never 100 per cent. Dr Reddy’s lab has tied up with RDIF for the Russian vaccine trials that are expected to begin in a few weeks. However, as per media reports, nearly 14 per cent of patients who have been administered Sputnik vaccines during clinical tests have reported side-effects which officials claim were mild in nature such as weakness, muscle pain and an increase in body temperature.