Weddings turn into display of wealth in Kashmir Valley

J&K CM Mehbooba Mufti and other leaders attended one such wedding reception at a luxury hotel, organised by a ‘separatist’ leader. 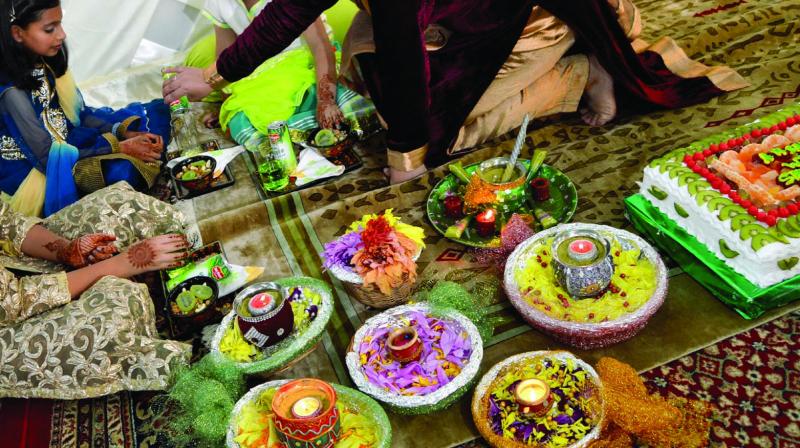 A variety of Kashmiri delicacies at a wedding.

Srinagar: Following the recent stone-pelting incidents in Jammu and Kashmir (J&K), people are now enthusiastically taking part or hosting big ‘fat’ weddings in the state. So much so that this has has become a daily routine.

The peak wedding season began after Id-ul-Fitr has witnessed hundreds of weddings so far. They prompted Mirwaiz Umar Farooq, J&K’s chief cleric and separatist leader, to lament over the marriage receptions and related functions having become “an occasion for crude display of wealth”. Warning against unnecessary spending, he said that this might become a cause of social imbalance and burden for those who can’t afford it. Several other religious leaders and social activists have also expressed their concern over expensive weddings.

But not a single imam, moulvi or mufti is learnt to have refused to read the ‘nikahnama’ (contract of marriage between the bride and the groom) or even objected to the display of wealth at these weddings.

CM Mehbooba Mufti and other leaders attended one such wedding reception at a luxury hotel, organised by a ‘separatist’ leader. Before the start of last year’s wedding season, the government had ‘restructured’ the number of guests invited to marriages ring ceremonies, feasts and parties among others. The order was supposed to come into effect from April 1, 2016. The civil unrest on July 8, 2016 saw many weddings deferred. As per the order, 500 guests could be invited to a daughter’s marriage or 400 in case of a son’s nikah.

During the marriage season, mutton worth Rs 50 crore is supplied to the Valley from Delhi and other livestock markets, as per officials. Though seven dishes are a must in wazwan, 20 to 40 dishes are served at weddings. Expensive frills such as gifting gold or silver souvenirs or making cash offerings have also crept into these marriages.

The officials talk about decrease in supply of mutton and other commodities in the Valley due to high consumption during marriage seasons, which results in hike in prices of the same. The officials also added that the demand for mutton during the marriage season increases manifold, which affects its supply during the rest of the year.