Women will also be asked if they enjoy the socio-economic equality as compared to their male counterparts, sources said. 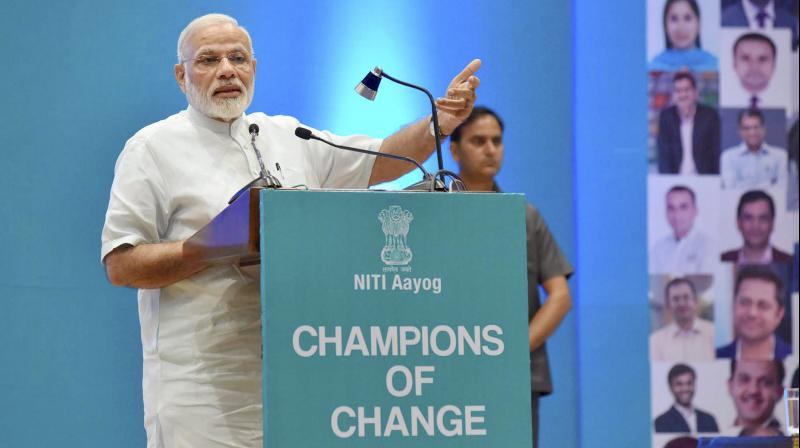 Women are considered the strongest vote bank of Prime Minister Narendra Modi, under whose leadership the BJP came to power in 2014. (Photo: PTI)

New Delhi: The RSS is conducting a nation-wide survey on the “real situation” of women, nearly half of the country’s population, and what changes they want in various sectors to have a positive impact on their lives.

The exercise is also being seen as an effort by the Sangh Parivar to help the ruling BJP, which has already started preparations for the 2019 electoral battle, address women’s concerns.

The Sangh Parivar is looking for timely intervention by the government as it does not want women voters to get disenchanted by the “Opposition’s propaganda” against the government, sources said.

A key component of the survey, being conducted with the help of Sangh volunteers and affiliates, will be the feedback from Muslim women on the issue of triple talaq, especially after Mr Modi had termed the recent Supreme Court’s verdict striking down instant divorce as a step towards “equality to Muslim women and a powerful measure for women empowerment”.

Women are considered the strongest vote bank of Prime Minister Narendra Modi, under whose leadership the BJP came to power in 2014.

At a time when the central government is making efforts to get the long pending Women’s Reservation Bill passed in Parliament, the findings of the survey will help the Modi government in “bettering” its women-centric policies, sources said.

Sangh affiliates, including its women wing Rashtriya Sevika Samiti, will also use the data for insight into women’s aspirations and factors affecting them, they said.

Women will also be asked if they enjoy the socio-economic equality as compared to their male counterparts, sources said. The survey will be completed by the year-end and the feedback will be compiled into a report and submitted to the government, they said.

From working women to housemakers, from labourers to tribal women, the survey is likely to cover respondents in both rural and urban areas. Most of the Sangh Parivar volunteers, including from the Sevika Samiti, Majdoor and Shramik sangathans, vanvasi kalyan ashram, among other affiliates, are collecting data from women of all caste and religion.

Details of respondents’ educational qualification and occupation will also be collected. The women will also be questioned on the difficulties faced by them in day-to-day life.

The RSS also wants to know as to how regularly women take final family decisions on various issues, what kind of social transformation they want to see and what kind of policy decisions by the government they feel would have a positive impact on their lives.