A mini-truck painted by an artist from neighbouring country is used for offering rides to NRIs. 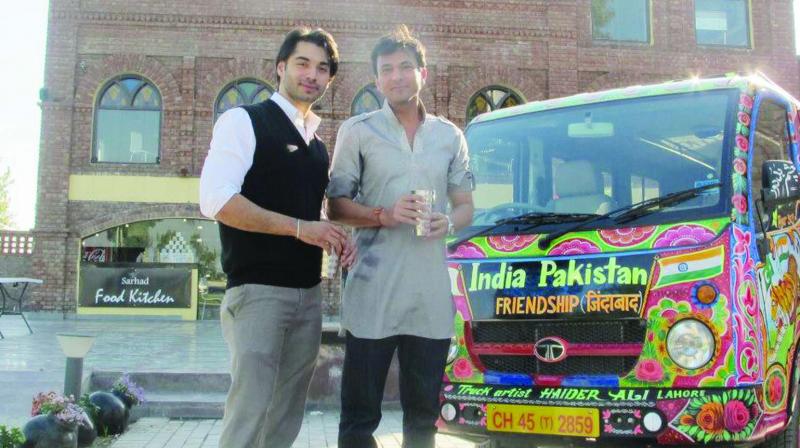 Chandigarh: You must have heard of religious tourism, village tourism or adventure tourism, now add one more term to this list “border tourism”.

Under this initiative of Amritsar entrepreneur Aman Jaspal one can go close to the border and experience the life of people there and also visit some unexplored historical places along the India-Pakistan border in Punjab.

Till now, apart from the Attari border flag ceremony, tourists had very little choice in terms of attractions in the border area.

However, Mr Jaspal, who owns a hotel close to the international border, is trying to give a new twist to border tourism, with some help from Pakistan, to take around guests of his hotel Sarhad, that literally means border, in a specially designed mini truck.

“The truck is designed and painted by famous Pakistani artist Haider Ali exactly the way vehicles are decorated in Pakistan and Afghanistan,” said Mr Jaspal.

Haider Ali, as a goodwill gesture, did not charge us for the task, he said.

“I got the idea of inviting Haider Ali after seeing a truck cart painted by him on display in New York museum,” he said.

Now tourists visiting Attari are taken around in this truck to many lesser-known but historical places and village near the border, he said.

The truck has a guide who informs the tourists about the places they are visiting. Many NRIs and foreign tourists have been attracted by this guided tour, said Mr Jaspal.

“The idea struck me when tourists asked me about the lesser-known places like Pul Kanjeri and Gurdawara Baba Buda Sahib at Chabal, after looking up the internet,” he said.

Pul Kanjeri, now a Unesco heritage site, is the place where  Maharaj Ranjit Singh built a fort to rest while travelling with his troops.

During the tour, the visitors are also taken to a drain which was flooded by Indian authorities to prevent the march of enemy troops into Amritsar during the 1965 war.

Some of the tourists want to see the real village life of Punjab, unlike some showcased under farm tourism where a whole village is created on a fresh chunk of land, he said.

For them, we arranged a visit to the Attrai village where they have lunch with a family.

“The lunch is cooked by the family and consists of seasonal vegetables and other local dishes. We send our chef in advance to ensure the hygienic standards of food and water,” said Mr Jaspal. The recipe is authentic Punjabi, he said.

Mr Jaspal said the popularity of the special tourist truck can be gauged by the craze among visitors to take selfies with it. “Our visitor feedback book is full of messages from tourists praising the truck with Pakistani design”, he added.