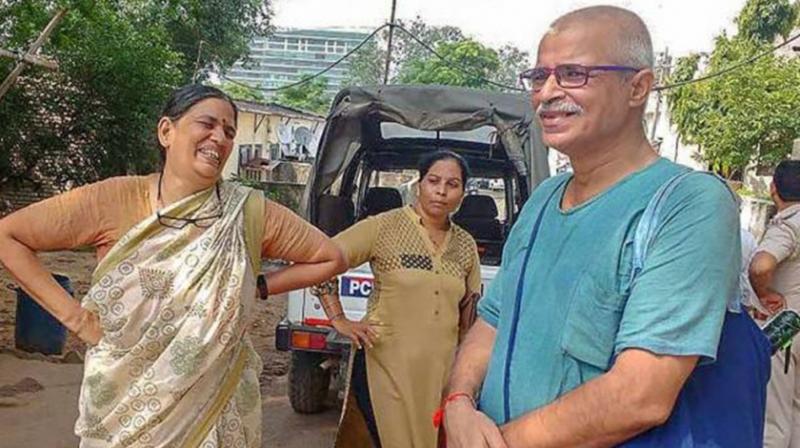 Human rights activist Sudha Bharadwaj after being arrested by the Pune police in connection with the Bhima Koregaon violence. (PTI file photo)

Mumbai: The NIA in its draft charges submitted before a special court here in the Elgar Parishad-Maoist links case has claimed the accused persons wanted to establish their own government and "wage a war against the nation".

The National Investigation Agency (NIA) submitted the draft earlier this month and a copy of it was made available on Monday.

The draft lays down 17 charges against 15 accused, including human rights and civil liberties activists, and they have been sought to be charged under various sections of the stringent Unlawful Activities (Prevention) Act (UAPA) and the Indian Penal Code (IPC).

The NIA has alleged that the accused persons were active members of the banned terror outfit CPI (Maoist).

As per the draft charges, the main objective of the accused persons was to establish a "Jantana Sarkar (people's government) through revolution and armed struggle to seize power from the State".

The draft also claimed that the accused attempted to "wage war against the Governments of India and Maharashtra".

Framing of charges is the first step before trial commences in the case where the prosecution describes the charges against the accused along with the evidence to be relied upon.

After the framing of charges, the court will ask the accused whether they plead guilty or not in the case.

The draft further claimed the accused had been playing provocative songs, enacting short plays and skits in Pune during the Elgar Parishad meeting and distributing Naxal literature.

It further alleged that the accused had an intent to strike terror in the minds of people by using explosive substances.

"That accused recruited students from various universities including the Jawaharlal Nehru University and Tata Institute of Social Science for commission of terrorist activity," it claimed.

The Elgar Parishad case is related to inflammatory speeches made at a conclave held in Pune on December 31, 2017, which, the police claimed, triggered violence the next day near the Koregaon-Bhima war memorial located on the outskirts of the western Maharashtra city.

The prosecution claimed the conclave was organised by people with alleged Maoist links.