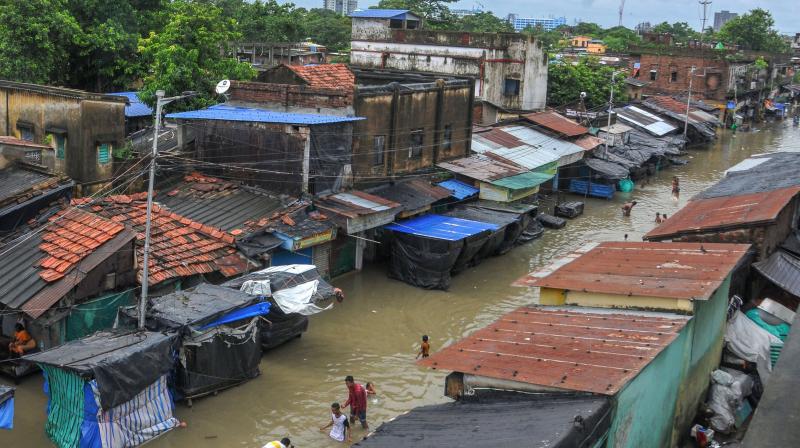 People walk through a waterlogged road during a tide, at Kalighat in Kolkata. — PTI

Howrah/Kolkata: Around 400 families of Aima and Alipore villages of Shyampur block in West Bengal's Howrah district have been evacuated due to floods trigerred by heavy rains during the past three days and high tide, a district official said on Saturday.

These families have been put up in a local primary school building, the official said.

The situation has been aggravated in the absence of a concrete guardwall on the embankment of the two villages which are located on the mouth of Hooghly and Damodar rivers, local panchayat official Lutfar Rahman Khan said.

Around 60 water bodies in the area have inundated the roads and the entire stretch remained flooded, he said.

Meanwhile, the ferry service between Gadiara in Howrah district and Nurpur in South 24 Parganas was suspended on Saturday and Sunday due to high tides and rain, a spokesman of Hooghly River Waterway Transport Samity said.

High tidal waves owing to new moon and incessant rain caused the water level to rise in the Sunderbans area, the officials said. Officials of the state irrigation department said a watch is being kept on the situation in South 24 Parganas and Howrah districts.

The south Bengal districts have been experiencing moderate to heavy rains since August 19 owing to a low pressure area in the north Bay of Bengal.

The weatherman said that moderate to heavy rain is likely to occur in south Bengal districts from August 23 to 26 causing rise in water levels of rivers in the region and waterlogging in low-lying areas.