The man, who officials said was of 'unsound mind', had reportedly crossed the runway's perimeter intrusion identification system. 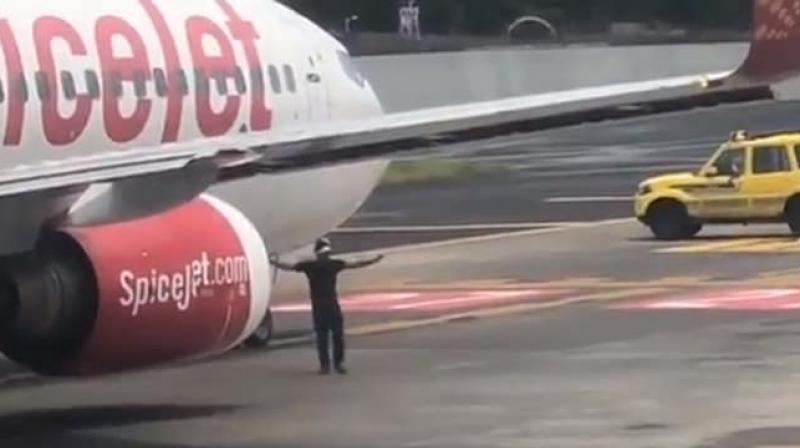 A video soon went viral on social media where it can be seen that the man calmly walked over to the SpiceJet plane and inspect it. (Photo: Gul Panag/ video screengrab)

Mumbai: In a major security lapse by the airport authority, a Mumbai man climbed over a wall of the city airport and walked up to a plane on the airport runway.

A video soon went viral on social media where it can be seen that the man calmly walked over to the SpiceJet plane and inspect it. As a yellow jeep pulls up behind him, the man proceeds to casually inspect the nose of the plane and then walk under it.

The 26-yr-old man from Sion’s area in Mumbai jumped the wall from the south side of airport’s runway 27. The incident occurred at 1.30 in the afternoon, said reports.

"The pilots of the SpiceJet plane showed presence of mind and immediately shut down the engines to avert any accident when they saw the man walking up the plane that was standing on runway 27," an official of aviation watchdog Directorate General of Civil Aviation (DGCA), was quoted as saying by PTI.

Actor and political activist Gul Panag sharing the video, questioned how the person got "so close to the engine?"

"I don't even. How did he enter? What was CISF doing ? He goes so close to the engine. Unbelievable," Panag tweeted.

The engines of the SpiceJet plane, which was readying for takeoff to Bengaluru, was immediately shut down to avert any accident, reported news agency PTI.

The man, who officials said was of "unsound mind", had reportedly crossed the runway's perimeter intrusion identification system.

"The man, who seems to be of unsound mind, has been arrested by the CISF," the DGCA official said.

Both the DGCA and CISF said they would conduct a probe over the incident.