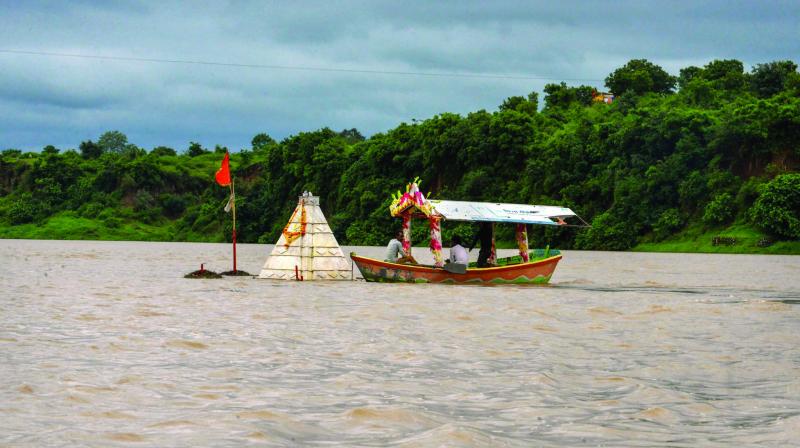 A temple is submerged in flood water after heavy rainfall in Jabalpur, Madhya Pradesh. (Photo: PTI)

Bhopal: At least 12 people, including two children, were killed in various rain-related incidents in different parts of Madhya Pradesh in the past 48 hours, official reports reaching here on Wednesday said.

While three children died when the wall in their house here collapsed late on Tuesday night, three youths drowned in a flooded canal on the outskirts of Bhopal early on Wednesday morning.

Similarly, four people, all employees of a local private company, were washed away when the car they were travelling swept away in a flooded river in Mandsaur district late on Tuesday evening. The car with bodies of all the four people stuck inside it was found half a km away.

In another incident, two people were washed away in a flooded river while crossing a bridge in Gopalpur village in Raisen district on Wednesday. Torrential rains in last 72 hours have caused floods in major rivers in Madhya Pradesh.

Scores of villages have been marooned in districts of Vidisha and Mandsaur following incessant rains witnessed in last three days. Met office here on Wednesday forecast heavy to very heavy rainfall in 21 of 52 districts in MP in coming 24 hours.