India must act before water runs out

The country breaks out in a cold sweat every time the monsoon is delayed. 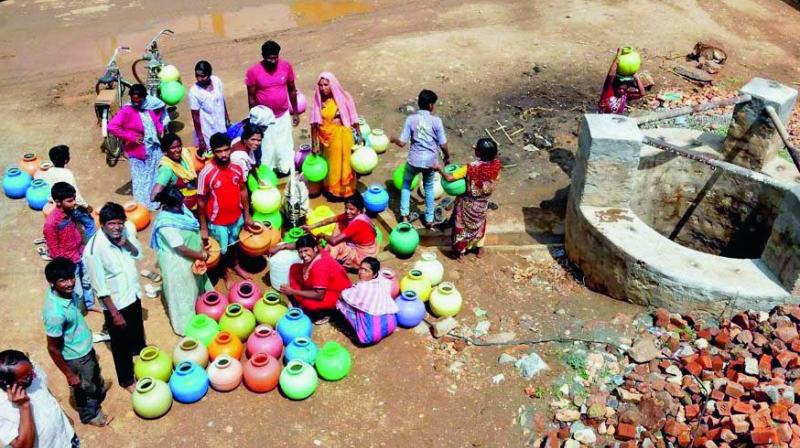 The country also has the largest number of people waiting for access to safe sanitation at a staggering number of 774 million.

Water is crucial to all societies as it has a myriad of uses. However, in India, it is of much more importance as over 600 million people make a living off the land. They rely on the monsoon to replenish their water sources and the unpredictable nature of rain leaves them vulnerable. The country breaks out in a cold sweat every time the monsoon is delayed.

India’s peculiar demographics make the water equation quite problematic .The country is home to nearly a sixth of the world’s population but has only 2.4 per cent of the world surface and gets only 4 per cent of the Earth’s fresh water. More than half of the country faces high water scarcity. Out of the 1.2 billion people living in the country, about 742 million live and farm in agricultural heartlands.

The country is in an alarming situation on the water front. A Water Aid report in 2016 ranked India among the worst countries in the world for the number of people without safe water. An estimated 76 million people in India have no access to a safe water supply, and the situation is only getting more serious. Government records show that in 1980, just one per cent of India’s rural areas had access to safe, usable water. By 2013, that had increased to 30 per cent, but the majority of rural India continues to live without proper access to safe drinking water

According to Unicef, only a quarter of the total population in India has drinking water on their premises and nearly three-quarters of all diseases in India are on account of contaminated water. The country also has the largest number of people waiting for access to safe sanitation at a staggering number of 774 million.

According to data from the World Bank, Indian farmers use nearly 70 per cent of the total groundwater drawn in the country each year. India uses more groundwater every year than China and the United States combined. The water extracted from India’s wells constitutes more than one-quarter of the world’s total. Due to this heavy overuse, groundwater levels are falling nationally by an average of 0.3 metres a year. In some areas, the levels are falling by as much as 4 metres a year. Indian utilities compound the problem by callously losing an estimated 40 to 60 per cent of water produced — in contrast to cities like Tokyo which loses 3.7 per cent, Singapore at 4.9 per cent and Phnom Penh’s 6.5 per cent.

India is not a water scarce country. Along with having major rivers, it receives an average annual rainfall of 1170 millimeters. .It has annual renewable water reserves of 1,608 billion cubic meters a year. With such robust back up and with the world’s ninth largest freshwater reserves, India’s water woes largely a result of inefficient management, and not scarcity.. Some of the main contributing factors are the country’s rapid population growth; its inefficient use of the stored surface water in some 5,000 large dams; the planting of water guzzling crops such as rice and sugar and free electricity and subsidized diesel for pumps that leaves no control over water use.

Successive Indian governments have done little to conserve water for off-season use. A staggering $52.7 billion has been allocated to so-called Major and Medium Irrigation projects from the first five-year plan (1951-56) to the 11th (2007-12), but irrigation has reached only 45 per cent of India’s net sown area. Even after constructing 4,525 large and small dams, the country has managed to create per capita storage of only 213 cubic meters — compared to 6,103 cubic m per capita in Russia, 4,733 in Australia, 1,964 in the United States, and 1,111 in China.

Ancient Indians understood the art of water governance. Kautilya’s Arthashastra, written around 300 BC, has details of how tanks and canals must be built and managed. The key was to clarify the enabling role of the state, the king, and the management role of local communities. The Kings did not have armies of engineers; they provided fiscal incentives to communities and individuals who built water systems. The British upset this traditional norm by vesting the resource with the state and creating large bureaucracies for management.

Water harvesting techniques have been employed for thousands of years to get conserve water for cultivation. This is the primary traditional use of rainwater harvesting. But this traditional wisdom and knowledge has been abandoned in the race to adopt new economies which have upset the ecological equation.

Watershed development is not a new concept in India. People have conserved water by harvesting, storing, and managing rainfall, runoff and stream flows. Most of India’s water management has been at the community level, relying upon diverse, imaginative and effective methods for harvesting rainwater in tanks and small underground storage systems..These were abandoned when we embraced modern reforms which we attributed to so called superior knowledge in comparison to age old wisdom.. They now remain little more than a fad.

The idea behind watershed development is simple: build a well-planned series of dams and earthen terraces to divert and slow the downhill flow of rainwater so that the soil gets enough time to absorb moisture. The terracing also control erosions, which keeps nutrient-rich topsoil from being washed away , and this in turn boosts the productivity of agricultural land. While climate change has caused rain to become more erratic, many parts of the country receive a more than adequate amount of rainfall. Many of the areas that are prone to flooding are the same ones that face drought months later. India is currently using only 35 per cent of the rainwater it receives. If rainwater harvesting projects are effectively implemented, 65 per cent of the rainwater which is wasted can be used.

Israel has been a role model for the world in matters of water management and India is now actively seeking Israel’s mentorship for addressing its water woes. Realising its dire predicament decades ago, Israel studied the “water equation” and made itself all but independent of Mother Nature. Israel took 70 years to solve its water problem; India won’t need that long, as it can emulate Israeli advances. But New Delhi must summon the political will to act before water runs out. Appointing enquiry and investigation committees and then poring through mountainous reports, undertaking research and reform, raising finances and installing new technologies will take a lot of time and the climatic stresses are mounting fast.